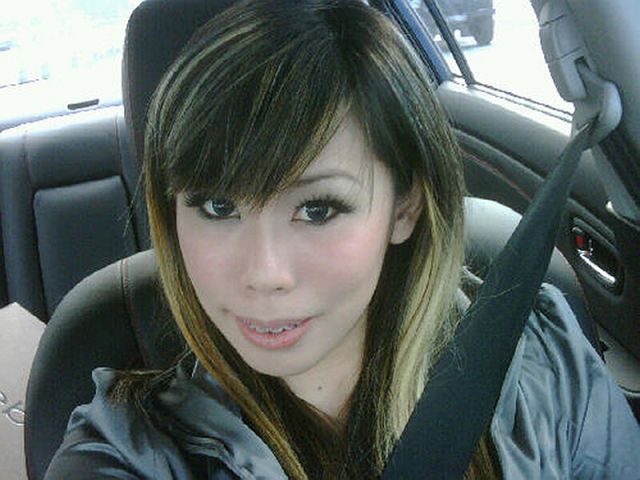 Spending a whopping $136,000 over the past several years, Koh was committed to completely changing the way she looked. The impetus for her transformation came from unexpected weight gain that she could not lose after dieting and exercise. She underwent liposuction and a body reshaping type procedure, which then led to various face surgeries, including chin implants, eyelid adjustments, nose jobs and even flattening of her ears. She has one more correction procedure in March, but according to Koh that will be the final surgery. However, she maintains a rigid and expensive (several thousand per year) maintenance regime that includes daily facemasks, weekly skin rejuvenation massages and biannual Botox and other filler injections. Koh claims to be satisfied with all of the procedures and says she is happy and the “same person on the inside.” According to Koh she receives hundreds of daily emails through her blog from people seeking cosmetic procedure advice and enjoys steering them in the right direction. 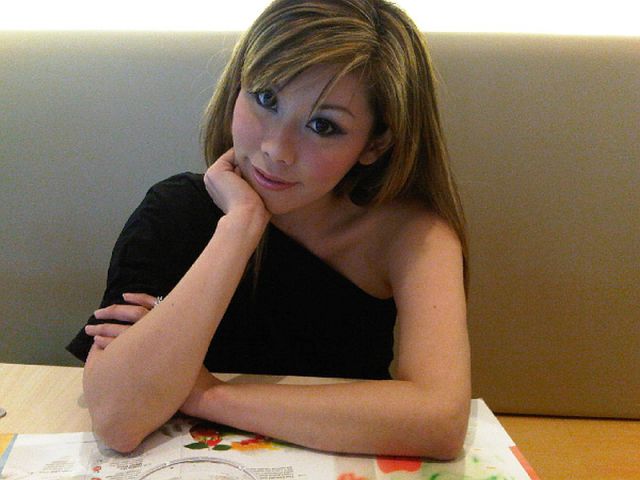 Jacqueline in February 2010, before any surgery was done. 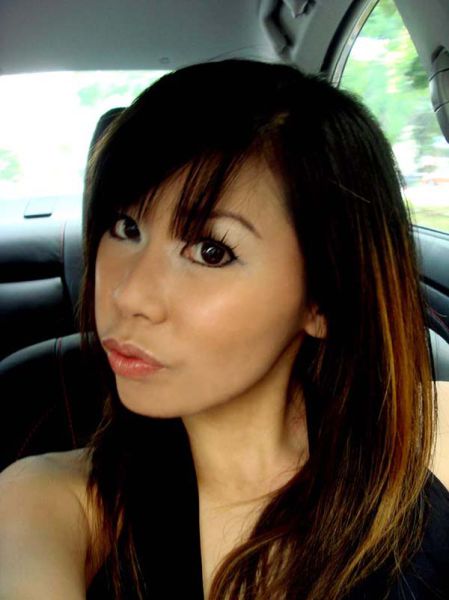 She wrote on her website that it all started when she tried to correct what she saw as her greatest flaw: her protruding mouth. 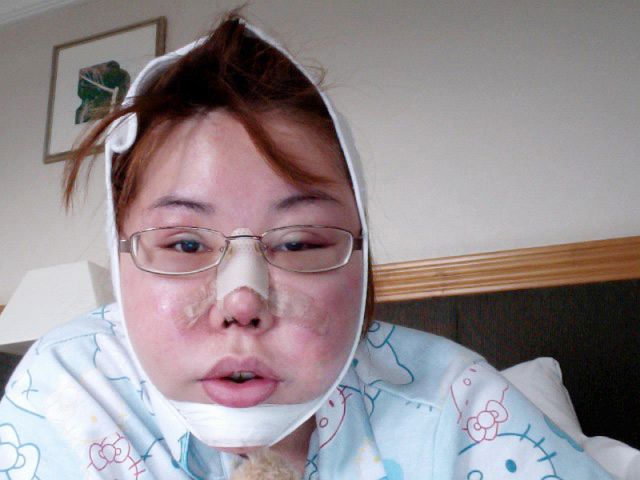 Jacqueline in October 2010, immediately after getting her eyes, nose, ears and chin done by a Korean surgeon. 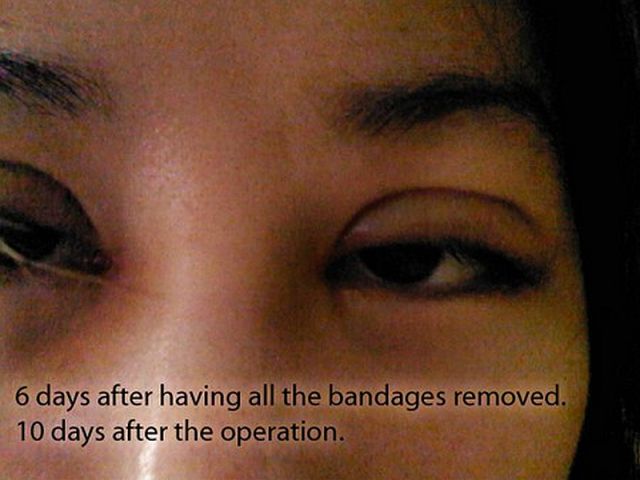 10 days after the operation and stitches were removed. 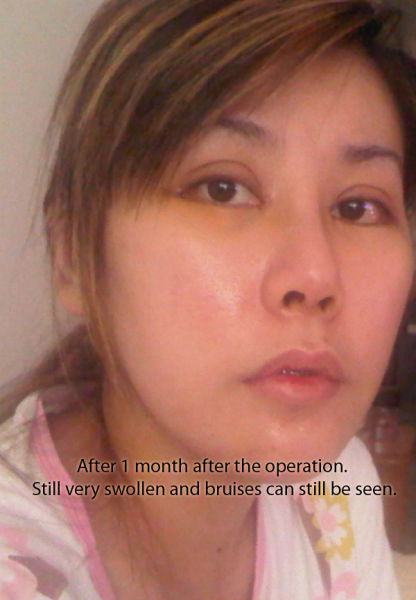 1 month after the operation, where she said the bruises turned yellowish and swelling is still quite bad. 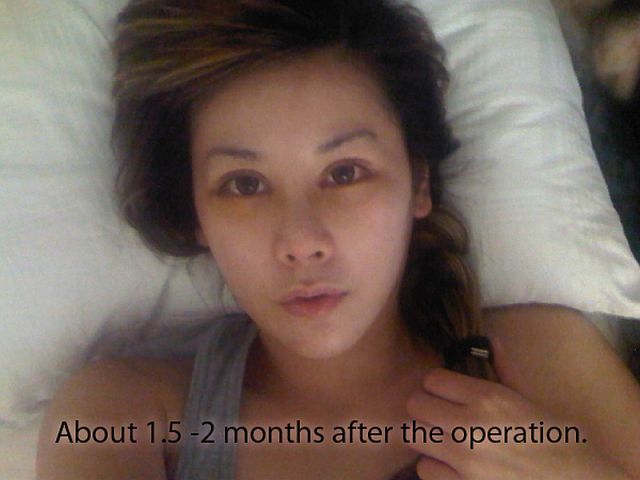 1.5 to 2 months after the operation. She was not happy with the results as her left eye was bigger than her right eye. She also said the tip of her nose was not well defined and shape of her chin "sucked". 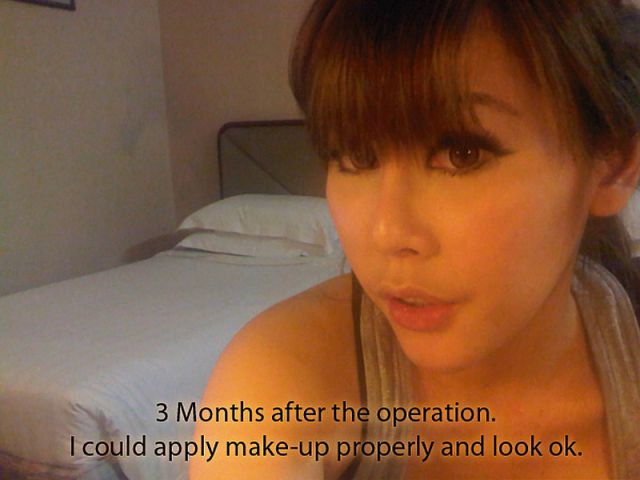 3 months after the operation. 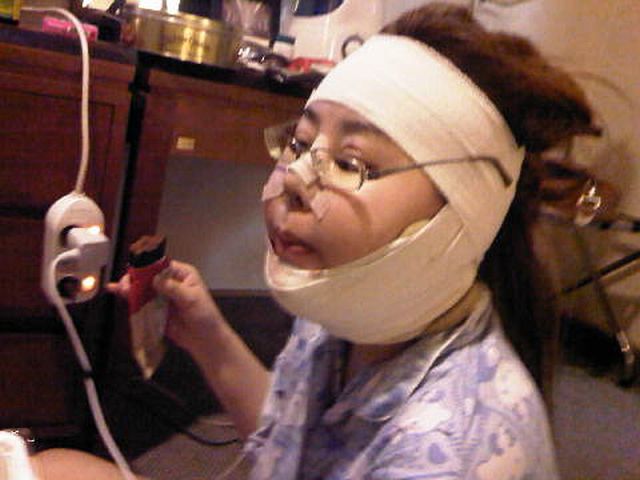 May 2011, four hours after correcting her nose and chin, and shaving her cheekbones. 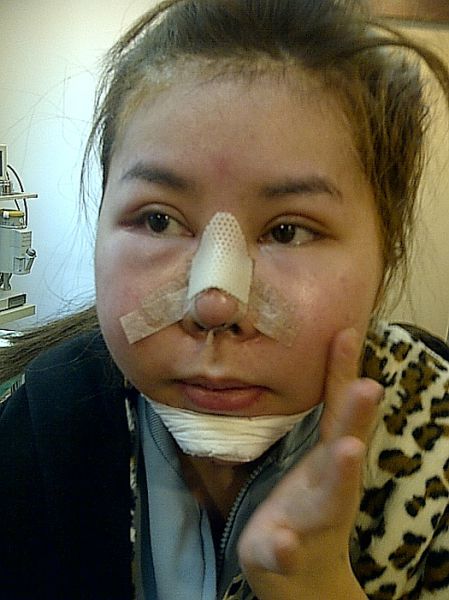 A day after the operation. 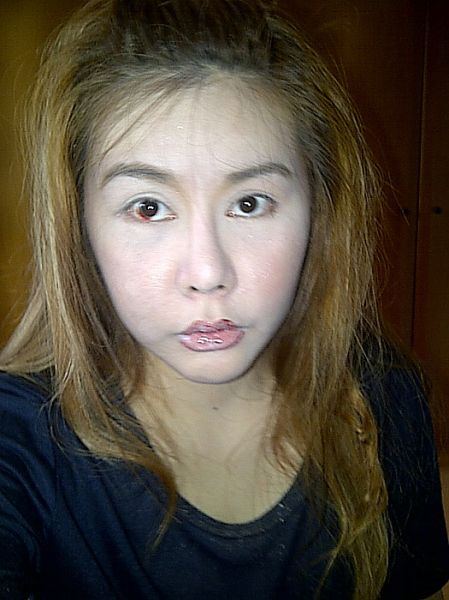 A week after the operation. 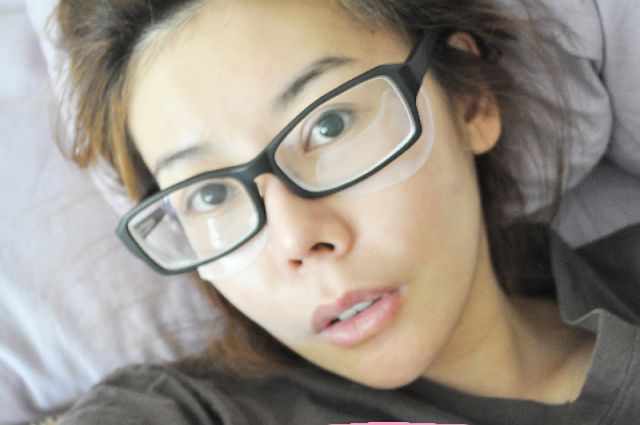 June 2011, a month after the operation, with eye masks. 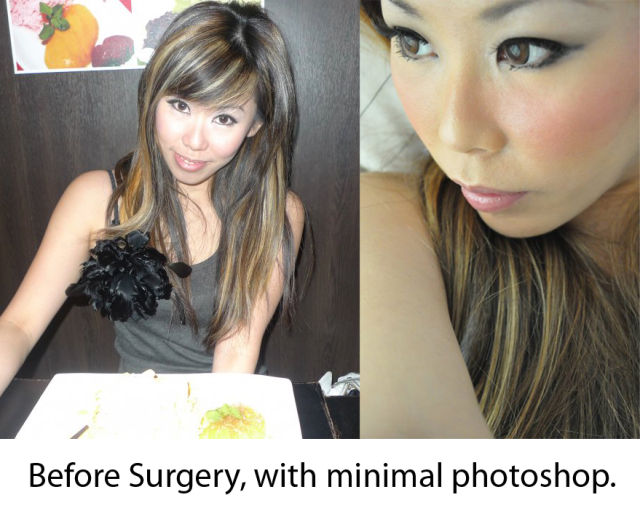 A front and side view of her face before she had any work done. 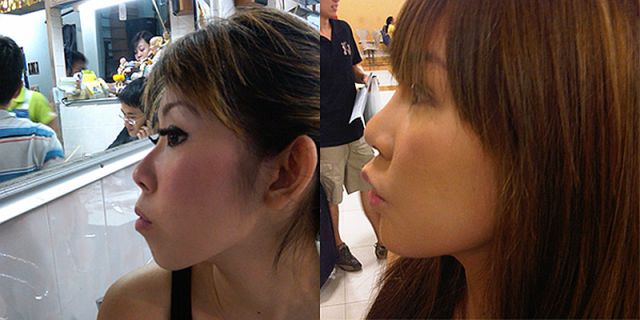 Picture of how she looked like before and after the chin augmentation. 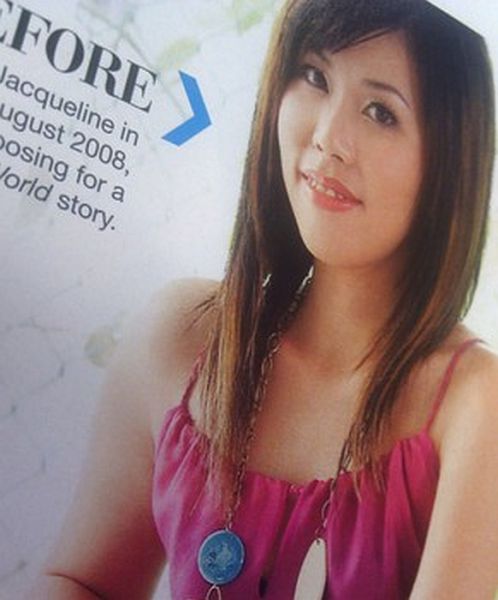 Last August, she wrote in her blog about her operations because she wanted to help others make more informed choices about plastic surgery. Here she is posing for a Her World story. 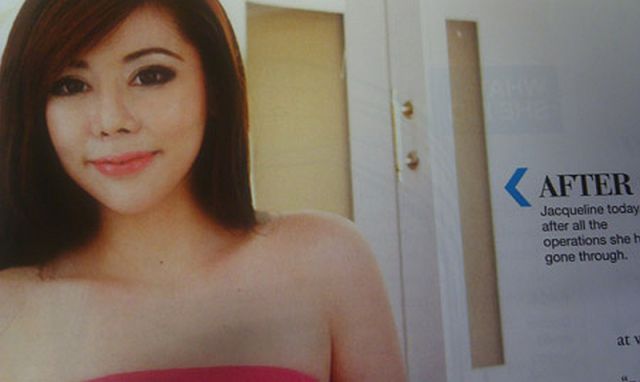 Jacqueline today, after all the operations she has gone through. 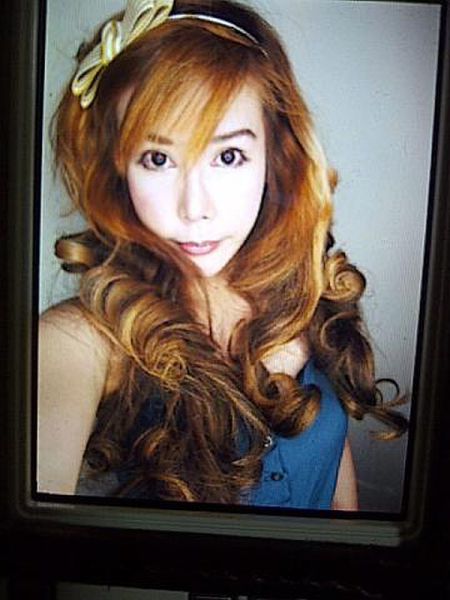 Though Jacqueline says she’s “not an anime fan”, she settled on the look of anime girls because she "really likes [their] big eyes and small faces”. 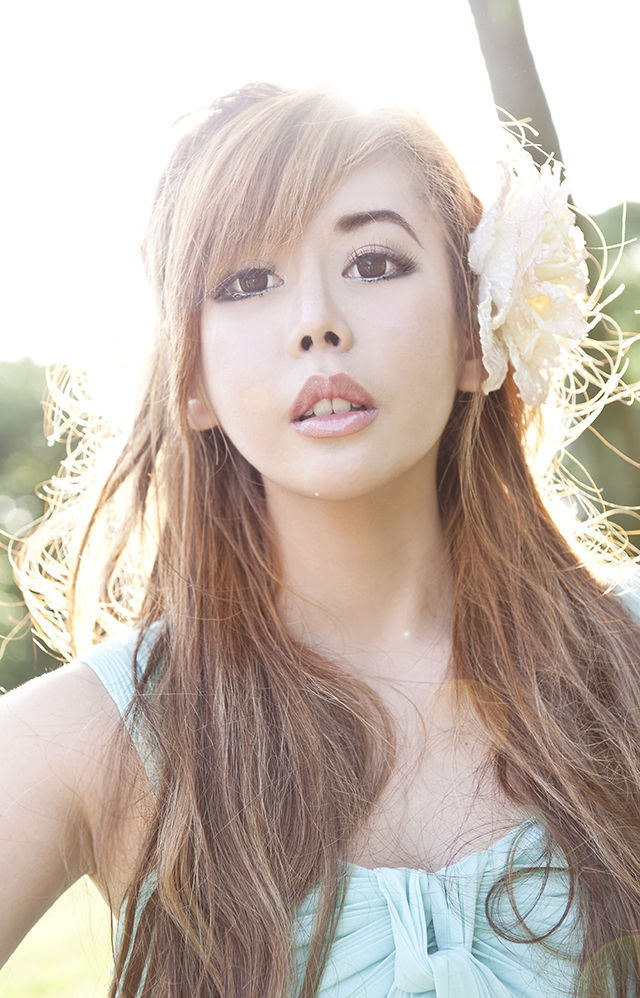 After the upcoming correction job in March, Jacqueline doesn’t see herself going for any procedures – for now. 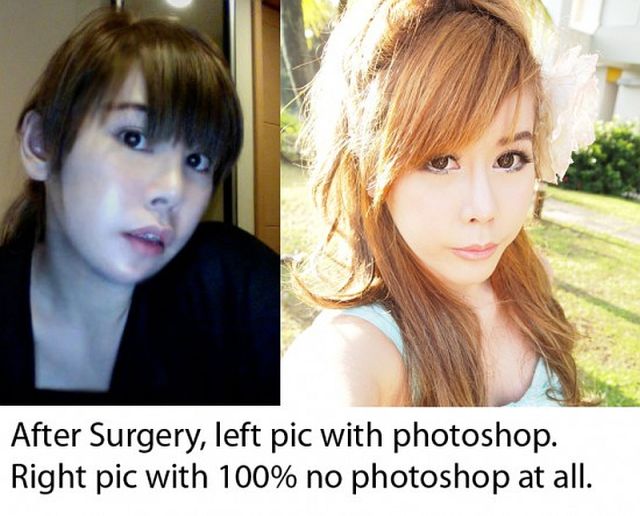 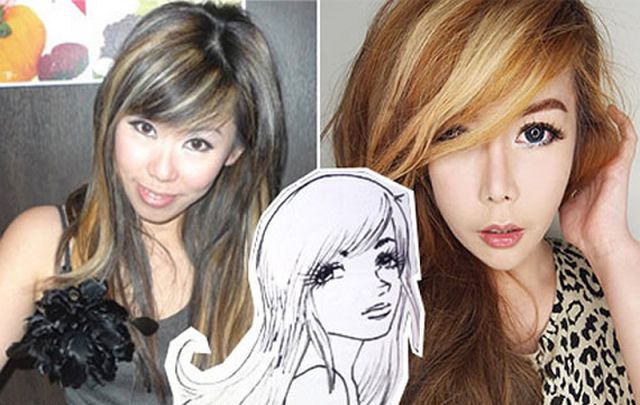 orendadude 9 year s ago
What a waste of money! I would have banged her without the surgery and besides, can't see her face when you are mounting her from behind. I would have spent some of that cash on a high price slut so we could have threesomes.
Reply
1

Mr. Ree 9 year s ago
Now, all she has to work on are those rodent-like front teeth.
Reply
0

DarkWolf 9 year s ago
Those rodent front teeth are hot in Japan it seems. People are actually having their teeth enlarged for some idiotic reason.
Reply
0

JanetteNo 9 year s ago
Whitch character is she trying to look like?
Reply
3

Chelsea 9 year s ago
This poor girl... she was beautiful before... and anyone who actually put her down for her looks.. when they know shes obviously got no self esteem ... should be ashamed of themselves...

we need to STOP telling woman they are not good enough

koowilliams 9 year s ago
many of her friends will tell her she looks really beautiful just so they don't hurt her feeling...
Reply
5

Tarzan 9 year s ago
thats a fucked up life..
Reply
1

gigantes 9 year s ago
on the bright side, her plastic surgeons will never have to worry about work...
Reply
1

Peanut 9 year s ago
She wants to look like white women.
Reply
1

cookaa 8 year s ago
her protruding mouth was due to her fucked up teeth. all that surgery when she coulda just fixed her fking teeth lol
Reply
1

Rakeiaru 8 year s ago
You guys shouldn't judge her because she got plastic sugary, I don't agree with plastic surgery because of my religion, but I think you guys are being worst by saying all of these things! I think she looks great before and after :)
Reply
-1

eleana.mosley 7 year s ago
As long as she is happy, that is all that matters. Everyone else needs to stop being mean. She looked beautiful before and she looks beautiful now.
Reply
0

cassandre.bouchard.3 6 year s ago
I don't think it said anything about her doing this because of bullying? She felt unhappy with the way she looked and she decided to change it. It's her money and her life and she can do what she wants. I think she looked great before the surgery and she looks great after it also. Just let her be happy.
Reply
0 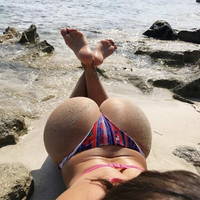 Nervie 8 month s ago
Honestly,there isnt much point in plastic surgery. Pay a ton of money to look like Barbie and have a fake face. Just doesnt seem smart to me. But whatever,at least it made her happy
Reply
How to comment
NO FUCKING RULES!!!