The idea for the movie was created when The Wachowskis were thinking for some new story for a comic book series. 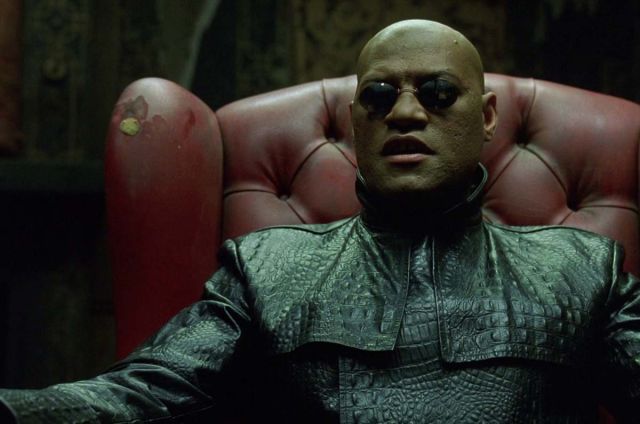 The Wachowskis approached Warner with the idea of the Matrix and Warner balked at the 80 million budget they had submitted. Warner instead agreed to give them 10 million.

The Wachowskis took the money and filmed the first ten minutes of the movie using the entire 10 million. They then showed the executives at Warner the opening scene. They were impressed, and green-lit the original asking budget. 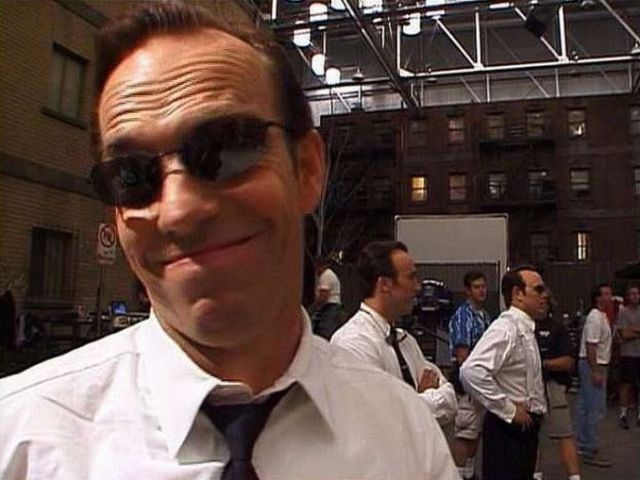 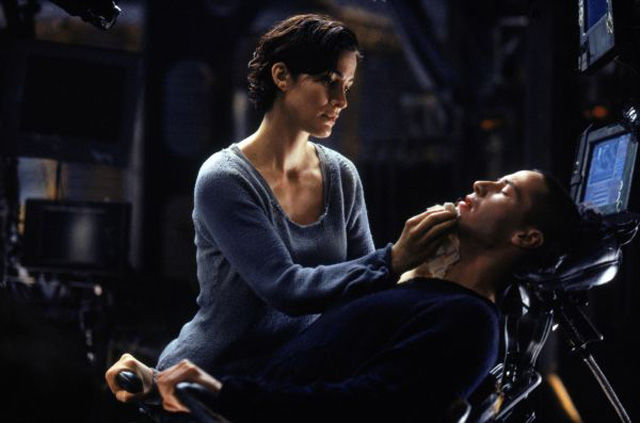 Reeves agreed to be a human pincushion. In the scene in which Neo is shown with needles sticking out of his body, a prosthetic torso was used. But a professional acupuncturist actually did place needles in Reeves head...unrelated cool picture 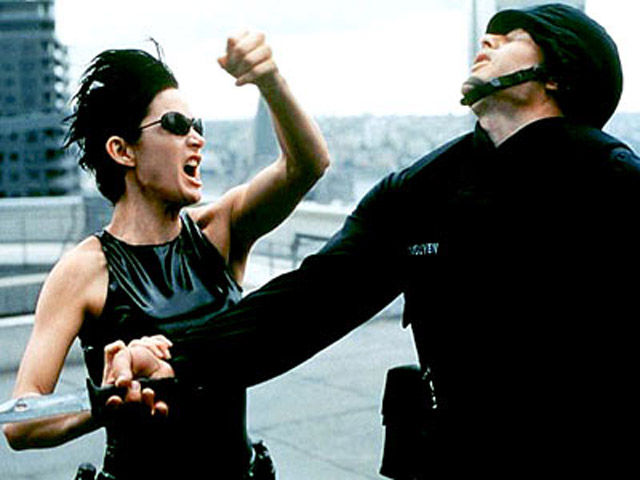 All the sunglasses were custom-designed. Theyre by Richard Walker and his firm Blinde. Walker also designed sunglasses for the title character in 2001s Lara Croft: Tomb Raider.

In the combat training program before Keanu Reeves starts his furious attacks on Morpheus, he rubs his nose with his thumb and finger, a similar mannerism of Bruce Lee before he attacks on his opponents. The move was improvised by Reeves. 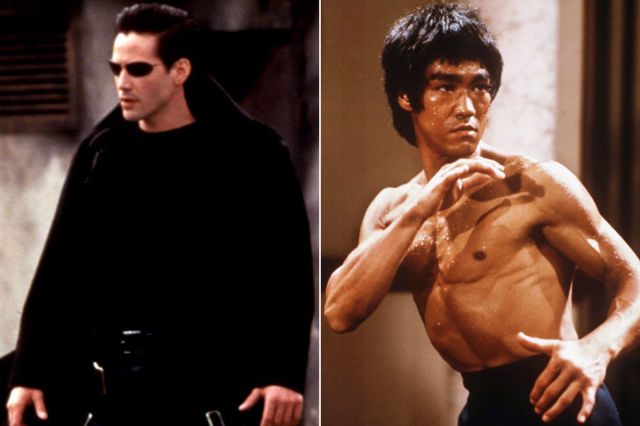 The street names are all from Chicago. The Wachowskis grew up there, so they used hometown shout-outs for specific locations. The movie was shot in Sydney, Australia. 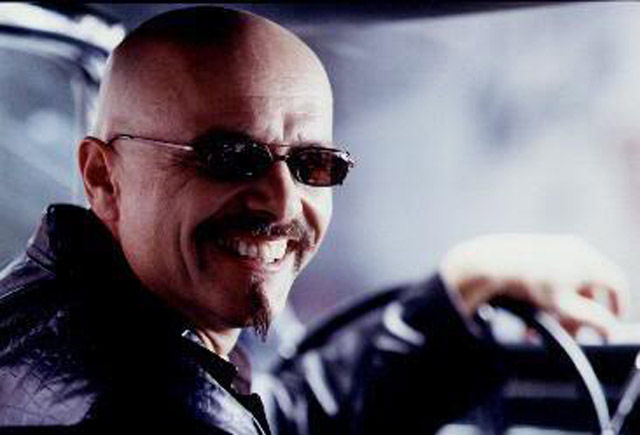 When Morpheus is explaining "What the Matrix is" to Neo, he uses the phrase, "Welcome, to the desert of the real." This is a paraphrase from Jean Baudrillard's "Simulacra and Simulation", the hollowed-out book where Neo keeps his illegal software. 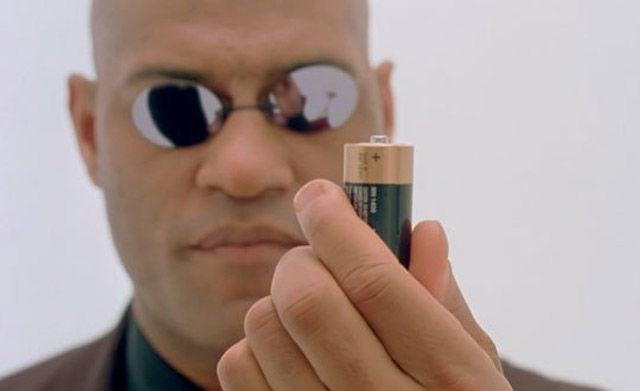 ...This Book explores the postmodern concept of simulation and hyperreality. The chapter where he hides is software is called "On Nihilism". Nihilism often involves a sense of despair coupled with the belief that life is devoid of meaning.

All scenes that take place within the Matrix have a green tint, as if watching them through a computer monitor, while scenes in the real world have normal coloring.

The fight scene between Morpheus and Neo, which is neither in the real world nor in the Matrix, is tinted yellow. 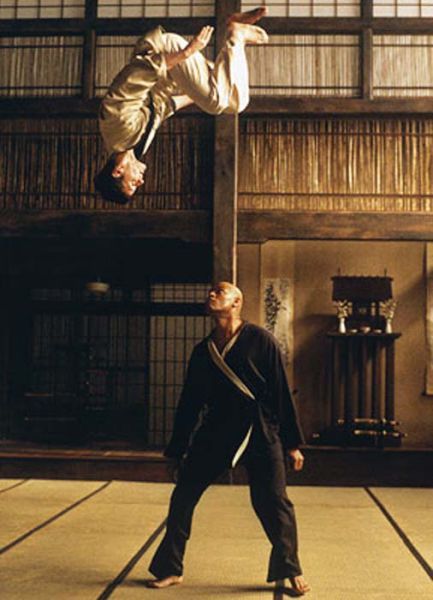 After Smith sends Neo flying backwards with a punch to the chest, Neo spews blood before getting back to his feet. Once he does, he taunts Smith in a fighting stance. The stance branches from the style Hapkido.

Producer Joel Silver was skeptical about the Wachowskis ability to pull it off. He told them to go make another, smaller-scale movie first, so they went off to do 1996s Bound.

For Keanu Reeves's scenes set in the real world at the start of the film, his costumes were deliberately shabby and ill-fitting to suggest Thomas Anderson's feeling of not quite fitting into the world. 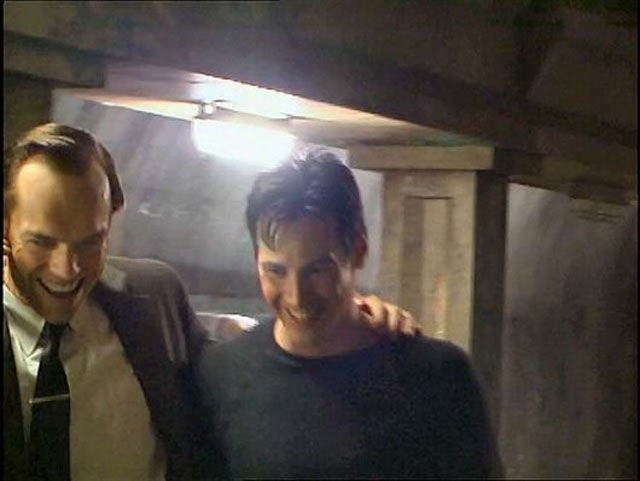 Carrie-Anne Moss twisted her ankle while shooting one of her scenes but decided not to tell anyone until after filming, so they wouldn't re-cast her.

Neo is often referred to as the "One", which is an anagram of "Neo".

In the first 45 minutes of the film, Neo has 80 lines. 44 of these lines are questions, just over half of his total dialogue, averaging at roughly one question per minute...this will now bug you.

Neos Passport expires on September 11, 2001. Sorry, Yet another stupid 9-11 conspiracy theory in a movie. 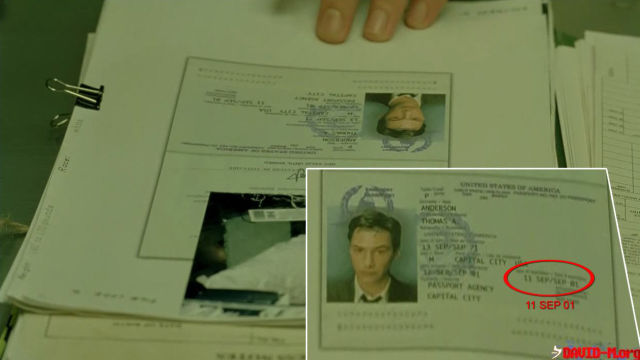 The powerful sidearm used by the Agents in all 3 Matrix films is the Magnum Research Israeli Military Industries Desert Eagle .50 AE.

Chow Yun Fat turned down the role of Morpheus.

This steak looks amazing...While shooting, cast and crew had a Chinese ritual of burning incense and had roasted pig barbecues every day. 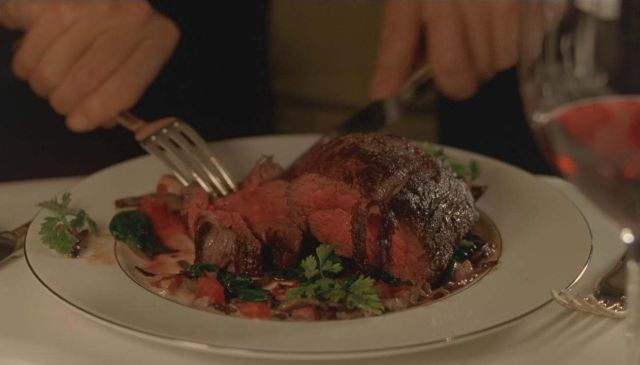 The visual effects comprise roughly 20 percent of the entire film.

There is no CGI in the scene, just the actors with special effects - all the explosions are real. The office building was a real set, the helicopter on wires, all the firing, real as well as the water pouring in all over the place. 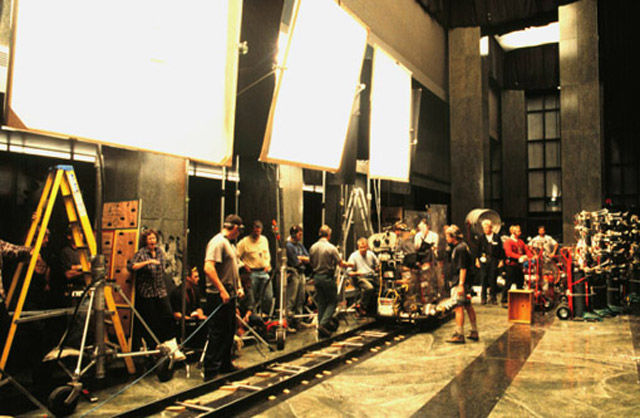 In Greek Mythology Morpheus is the god of dreams. Somewhat ironic considering Morpheus' role here is to awaken people from their dream states to reality.

Neo Thomas Anderson wakes up during the course of the film seven times. 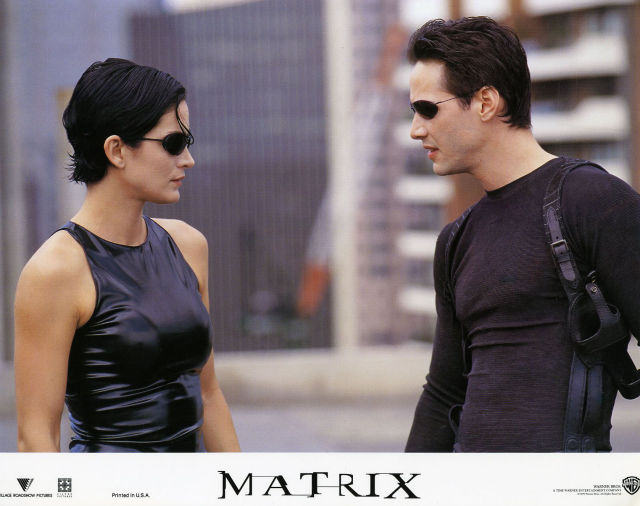 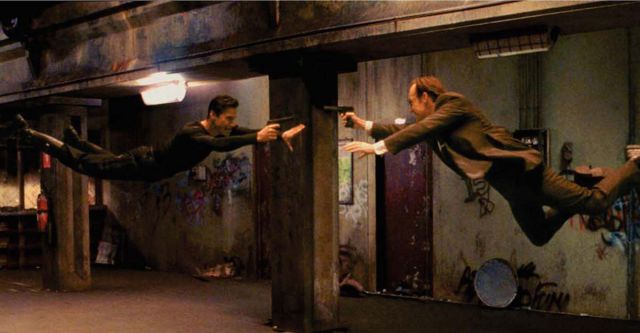 The spring-loaded cell phones used in the film were Nokia Stilleto's or 8110's. These phones were produced in limited quantities and were only available in Europe and in Australia. 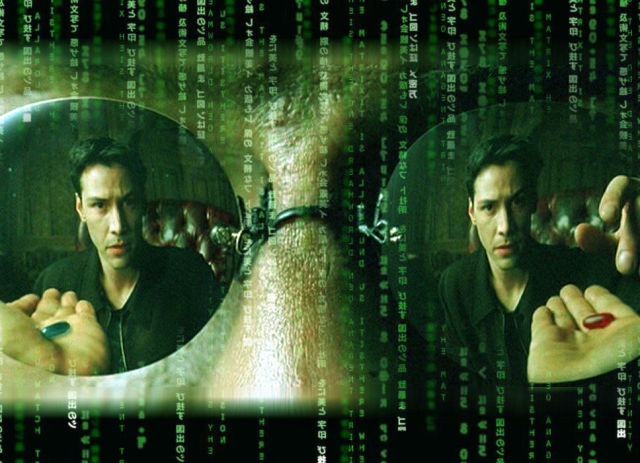 When Neo gets in the car with Trinity for the first time, Switch refers to him as "coppertop". Coppertop is a slang for the Duracell Battery, which is the battery Morpheus shows to Neo as he explains how the human race became an energy sources.

Before his character's final speech at the end, Keanu Reeves never has more than five sentences in a row to speak. 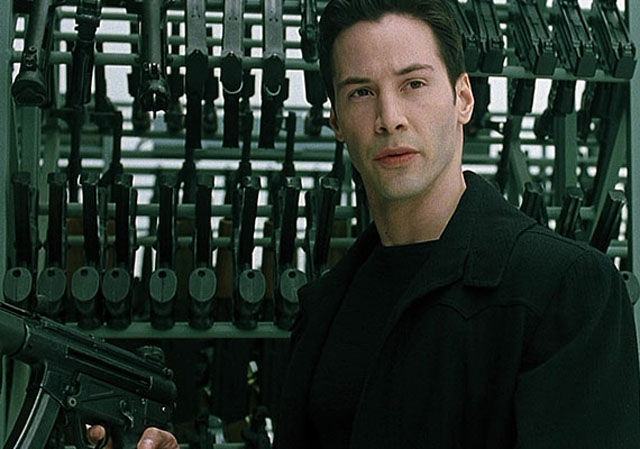 The car used while inside the matrix is a black 1965 Lincoln Continental.

When Carrie-Anne Moss saw the first cut, it was also the first time she'd ever seen herself in a movie before.

The Wachowskis harbored their vision for five and a half years, working through 14 drafts of the screenplay. The final concepts took up 500 storyboards. 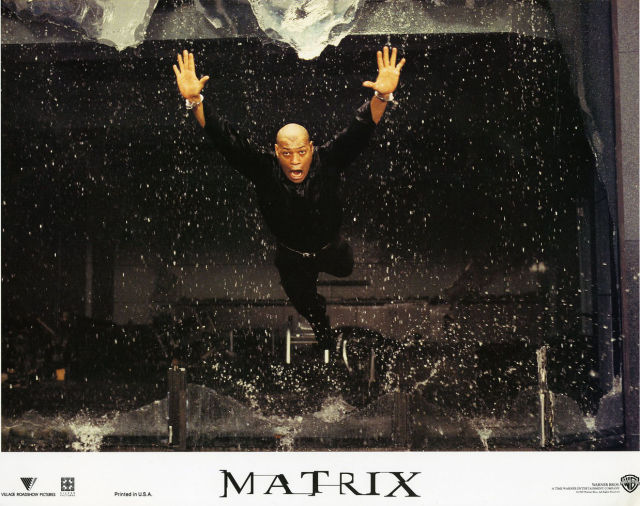 According to The Wachowskis, all animals in the Matrix universe are computer generated images.

According to costume designer Kym Barrett, Trinity's costume was made with cheap PVC because of much tighter budget. Similarly, Neo's coat wasn't actually a very expensive fabric. It was a wool blend got for three dollars a yard.

In 2012, was selected by the U.S. Library of Congress for preservation in the National Film Registry archives.