What You Don’t Know About World Famous Statues 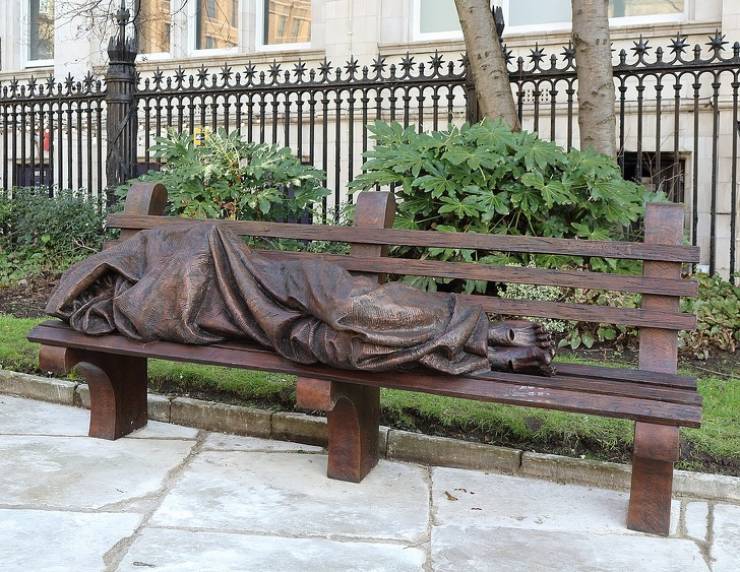 Someone called an ambulance for Homeless Jesus.

Initially, the sculpture was installed in Toronto, but today you can see hundreds of its copies all over the world. For example, one of them is located in the Office of Papal Charities at the Vatican.

Many churches near where the statues are located often help the homeless. The fact that the statues look realistic, makes them get mistaken for real sleeping people. In Hamilton, during severe frosts, some caring people called the emergency services several times to help the unfortunate person who was out on the street in such cold weather. 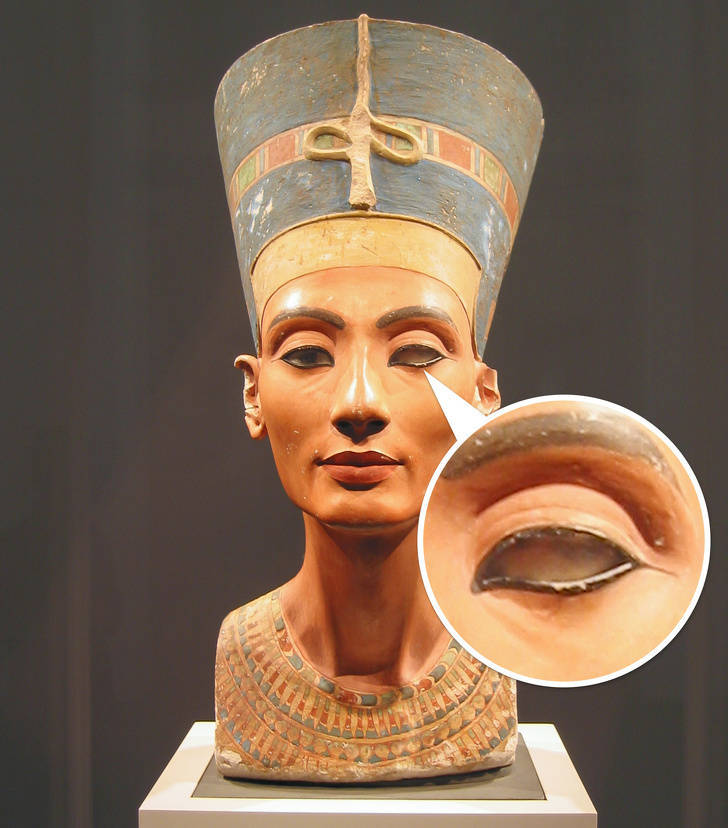 The Nefertiti Bust never had the left eye.

It is believed that one of the most famous works of ancient Egyptian art is really flattering to the wife of the pharaoh because her face is depicted to be too symmetrical. The only exception is her eyes — one of them is missing. The archeologist who found the statue claimed that it has never been there because there are no signs of processing or glue in the eye socket.

The exact reason why an ancient sculptor kept this defect remains unknown. Scientists have several theories but none of them has become generally accepted.

The eye was supposed to be added after Nefertiti’s death because the figure with 2 eyes was believed to be a part of a depicted human and was meant for “reviving” them after death.
The bust was a teaching tool in a workshop and it was used to show how to create sculptures before putting eyes on them.
Nefertiti fell out of favor before the work on the sculpture was finished and the master didn’t finish the bust.

The tsarina had an eye illness. 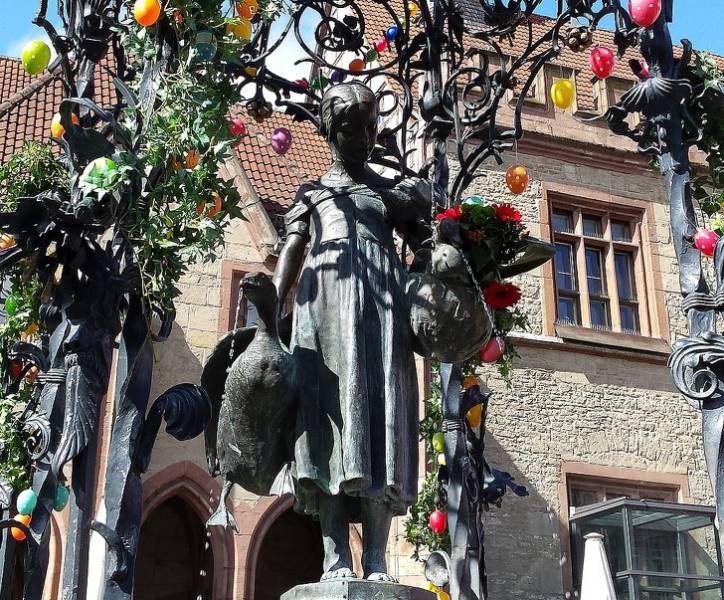 Goose Lizzy from Göttingen is believed to be the most kissed girl in the world.

Goose Lizzy is the symbol of those who study at Göttingen University. They had a tradition to kiss the sculpture after becoming students. Since the tradition was quite noisy and disturbed the residents of the surrounding houses, it was officially forbidden to kiss the statue. But students have continued to ignore this rule. 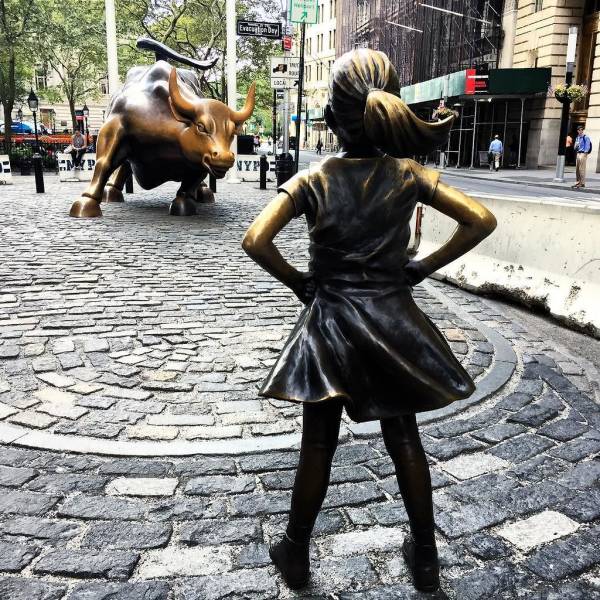 Charging Bull was taken by the police.

In December 1989, the sculptor Arturo Di Modica brought his creature to the front of the building of the New York Stock Exchange and left it there as a Christmas present to the residents of the city. These things were out of the ordinary at that time and street art didn’t have the popularity it has now. That’s why a lot people got interested in the bull. They would intentionally come to the Stock Exchange to look at the statue. But since Arturo had installed the statue illegally, without permission from authorities, the police confiscated it.

The bull was returned only after people started to show their resentment. But this time it was installed 2 blocks from the Stock Exchange.

By the way, when the statue called Fearless Girl appeared in front of the Charging Bull, Arturo was very unhappy that it was installed without prior agreement with him. Later, the statue of the girl was moved. 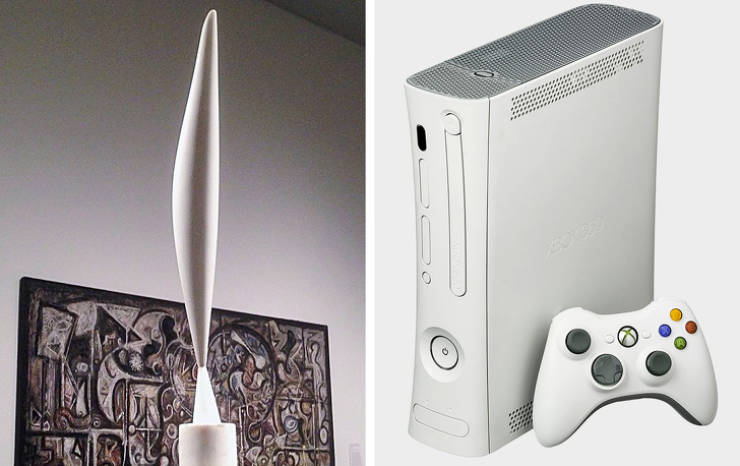 The designer of the Microsoft Xbox 360 got inspired by the series of sculptures called Bird in Space.

The creator of Bird in Space, Constantin Brâncuși said that the series of these sculptures symbolizes an escape from a routine world. And agreed that it would be a very good image for Xbox. 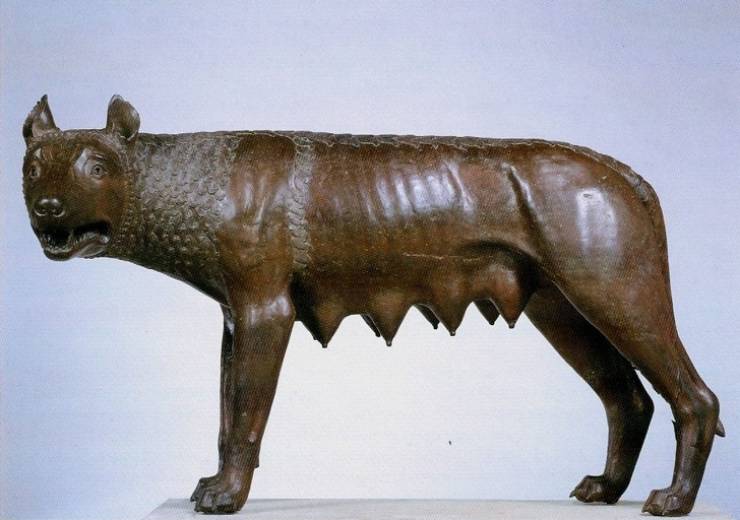 Capitoline Wolf was not created in ancient times.

The statue of the wolf who nourished the founders of Rome is one of the most famous symbols of ancient times. It was believed that it appeared around the 1st century BCE. At the same time, it is reliably known that the figures of Romulus and Remus were made in the 15th century. However, after recent research, it was officially declared that the “Wolf” was created between 1021 and 1153 CE. 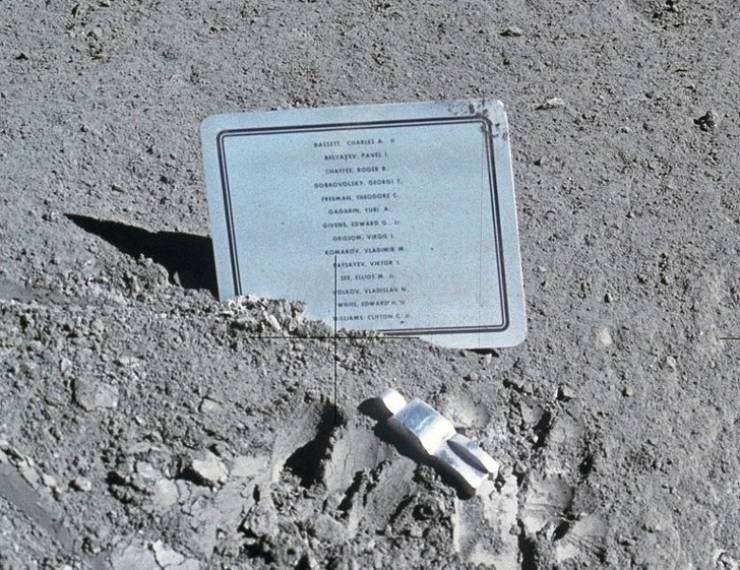 Fallen Astronaut was not supposed to depict dead spacemen.

The only art object placed on the Moon represents all of the dead astronauts. The plate next to them lists the names of those who died by the time of the installation of the monument. But the artist who created this art piece was very dissatisfied when he learned what his sculpture was named and what meaning it was given. He declared in an interview that the figurine should be standing vertically and symbolize all of humankind. 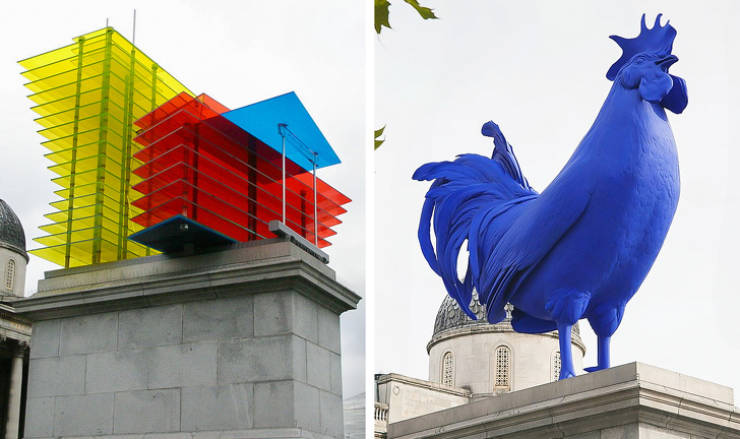 The pedestal in the main square of Great Britain is being saved for a special statue.

One of the main tourist sites in London is Trafalgar Square. It has 4 pedestals that, according to the architect, are designed for monuments to famous British people. 3 of the pedestals have the statues of King George IV, and generals Henry Havelock and Charles James Napier.

The sculptures on the fourth pedestal constantly change. According to an unofficial opinion, the pedestal is intended for a statue that will perpetuate the memory of Elizabeth II. Nelson Mandela, Margaret Thatcher, and Marshal Park are also among the possible candidates. 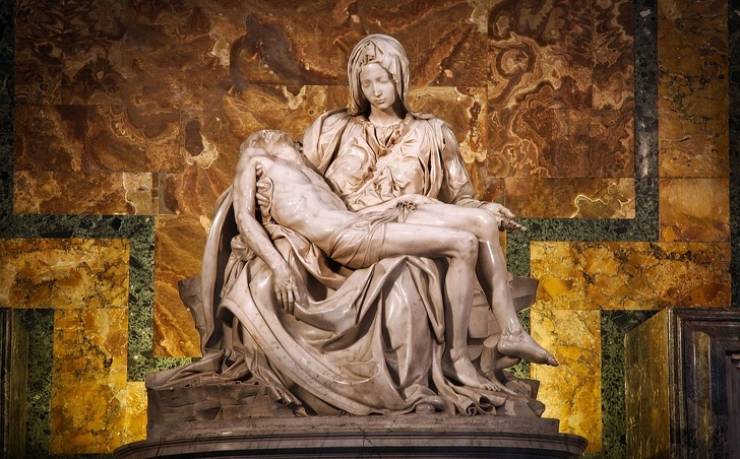 Michelangelo had to indicate his authorship on the Pietà.

It is the only case when the famous sculptor indicated his authorship. It is believed that he did it only after hearing onlookers fighting about who created the statue. 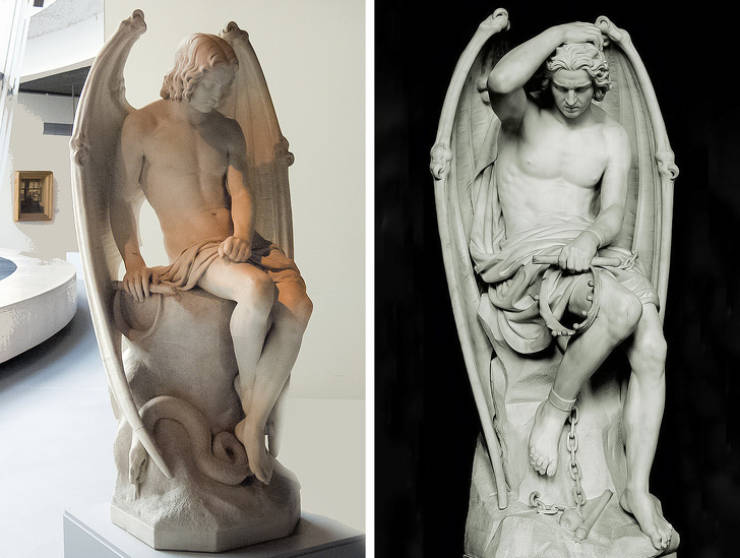 The Genius of Evil had to be replaced because it was too attractive.

One of the most famous art depictions of the devil The Genius of Evil is located in St. Paul’s Cathedral, in Liège. A shackled and crying Lucifer embodies the recognition of one’s sins and repentance. It’s not for nothing that the statue is considered an outstanding work of art, however, in reality, it represents a deliberately distorted copy of another sculpture.

The first The Genius of Evil was rebellious, bold, and looked so attractive that it distracted women who came to the cathedral to pray. After many debates, the figure was replaced with a more appropriate one. The new statue had new details like chains and a bitten apple at the feet as symbols of punishment and sin, while its pose was changed so that it would depict repentance. 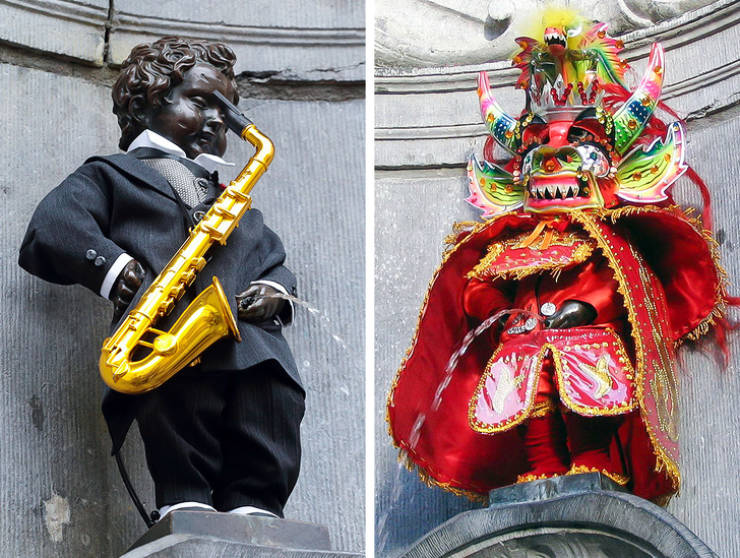 Changing the clothes of Manneken Pis became a big ritual.

The most famous symbol of Brussels regularly gets new outfits. Since 1954, an association called “The Friends of Manneken-Pis” has claimed responsibility for them. They carefully choose the next outfit out of hundreds of offers they receive every year. The schedule for changing the outfits is hanging on the railing near the statue. Each clothing change is a colorful ceremony that is held to the music of a brass band.

The clothes of Manneken Pis are stored in a special museum and the oldest exhibit in the collection dates back to the 17th century. 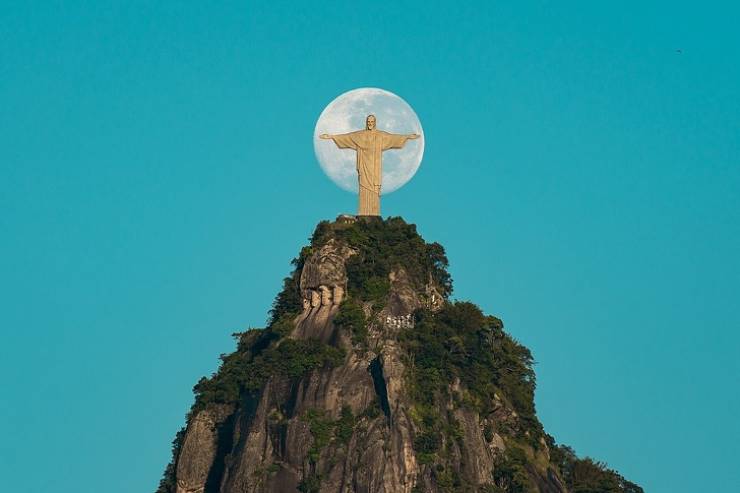 The Catholics of Rio de Janeiro have to keep a supply of stone that Christ the Redeemer is made of.

It’s done out of necessity: several times a year the statue is hit by lightning and the stone is kept for the restoration of the sculpture. Once, the statue lost the tips of its middle finger and a thumb during a thunderstorm