“She ate paper… At first, it was just straw wrappers when we were out. OK, kinda weird. But she was this Molly-Morman babe who had none of the religious leanings, worth the crazy, right? Nope.

Shit finally reached a tipping point when we were doing the horizontal shuffle, and she pulled out a sheet of printer paper. She started eating this piece of paper, mid-sex and I couldn’t do it anymore. We broke up that week and I haven’t seen her fibrous ass since.”

“She ate with two hands, all the time. Even when I took her out for Italian food, she’d request a 2nd fork and literally dual-wield them while eating spaghetti. When she’d eat burgers, she’d dig her fingers into the bun so hard it looked like the burger had bullet holes in it. When I met her mom, one of the first things she said was,”I didn’t teach her to eat like that and I still don’t know where she got it from.”

“She told her friends and family that she got pregnant and lost the baby when we weren’t even having unprotected sex. I mean, we were 18 and dating for like 6 months, so that wasn’t even close to being on my radar. When I found out through a mutual friend, I laughed it off and didn’t think much more of it. (I mostly ignored it because I was 18 and regular sex was a nice thing to have). It took a few more blatant red flags before I pulled the plug.

A fun little bonus detail: when I broke up with her, she told all her same friends and family that she was pregnant again and I bailed on her and the baby (this one also resulted in a miscarriage). I lost a lot of good friends from her lies. Also, in hindsight, the sex was average.”

“She kept fucking my friends.”

“She told me she had SIDS as a child. She was just a pathological liar. She was also struck by lightning :/ Her stories were fucking crazy and always changed, but as the title says…good sex.”

“Probably the plethora of empty wine bottles around the apartment, and the knowledge that she’d just gotten out of a long term relationship. Somehow it never dawned on me that I was the rebound guy.”

“She got annoyed because I told her about a coworker who felt bad about cheating on her bf. She said “just keep shit on the DL… Nobody has to know if you keep your fucking mouth shut”. Immediately knew someone else was deep in her guts.”

“His “ex” kept showing up at his place. Come to find out months later, they were still together and just fighting. And I was the unwitting other woman. :”

“We were in a hotel and she would just keep screaming at the top of her lungs. I kept telling her to quiet down, but instead, that only turned her on more. Only continued because she was my girlfriend at the time and it was pretty good sex for me as well.”

“Had an affair with a married woman, she left her husband for me, married me, then cheated on me. If that isn’t karma idk what is.”

“Tried to run over her ex with her car. Thought it was a joke until I met him and asked about it. He was a lunatic too but fighting crazy with crazy is just bat shit crazy.”

“She and her little brother always seemed suspiciously close. Not like super nice to each other, they just had a weird dynamic. Like he would hear us fucking through the wall and bring it up casually the next day, and they would both just laugh and make creepy jokes about it. After we ended, I was convinced they were fucking each other. To be fair, I’ve never heard any corroborating evidence, but…I’m still not unconvinced.”

“When she (wife if 20 years) kept asking for specific things like ‘finger me like this’ or ‘grab me here when you fuck me like that’. Ya, of course, she was getting those ideas from her boyfriend.”

“Just knowing that she was pro-life and refused to use condoms. We had sex like 5 times and luckily the pull out method worked but god damn was it stressful.”

“She cried when I just wanted to make out after our first date. She said I wasn’t serious if I didn’t want to fuck her. She was 46. And hot as fuck. I was 31. Cougar time! So I fucked her. And the sex was great, but she was fucking crazy and I bailed after about 5 months.”

“She basically told me she might cheat on me if she had the opportunity with her ex. It was my first relationship and I was as stupid as can be.”

“I was hooking up/very casually dating a guy (an idiot) I’d met on tinder. I had a cat at the time and was leaving for a long weekend so asked him to feed the cat.

I came home and he had moved into my apartment. like fully moved in. his clothes in the closet, his sheets on my bed, he’d brought furniture from his parent’s house, and he put his high school hockey trophies on display in the kitchen (we were 26 and 27). I regret to say it lasted several months, but it did not end well. What a dick, pun very much intended.” 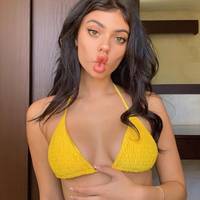