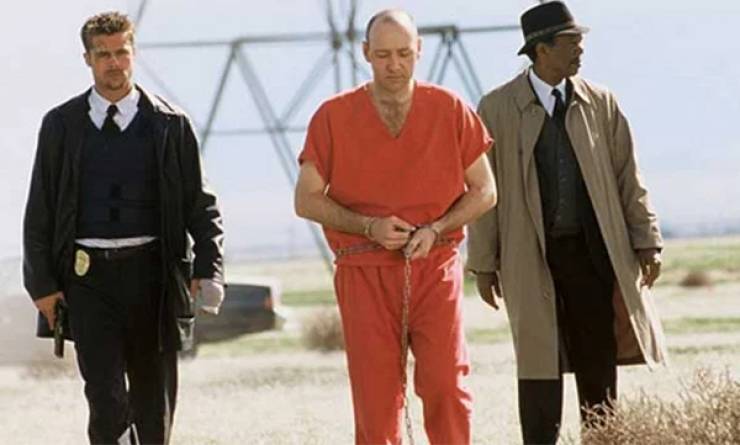 Director David Fincher told Kevin Spacey and Brad Pitt “this is not going to be the movie that you’re remembered for, but it may be a movie you’re incredibly proud of.” 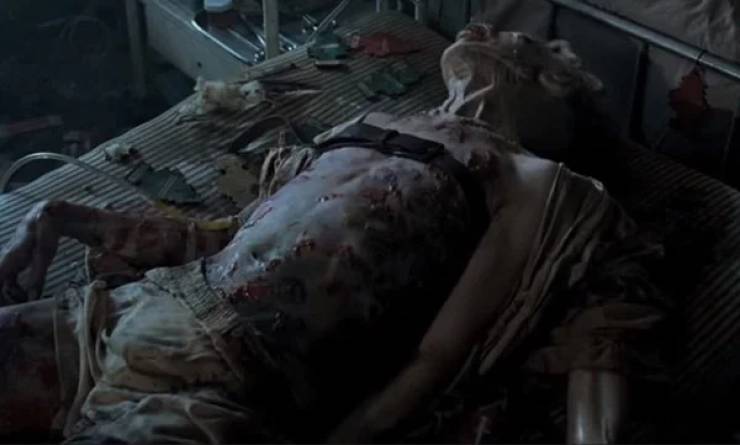 David Fincher said that he wanted someone who was incredibly skinny, around 90 pounds, to play Victor. When Michael Reid MacKay auditioned, he weighed 96 pounds. Fincher gave him the part, and jokingly told him to lose some more weight. Much to his surprise, MacKay had lost another six pounds when filming started. 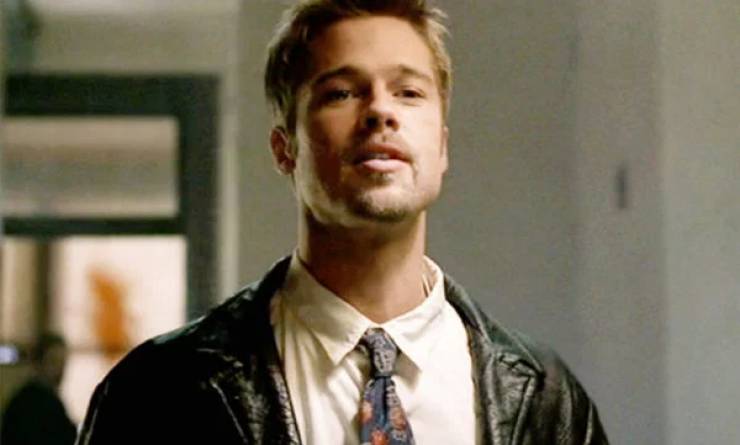 Brad Pitt bought his own ties for the movie. He wanted Mills to have poor fashion sense. 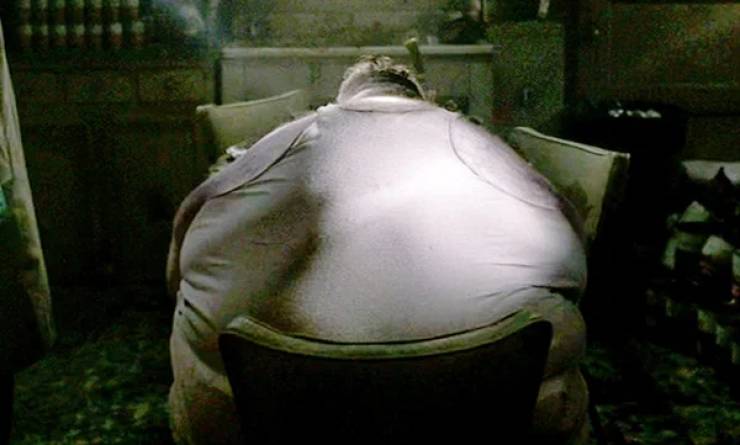 Fincher said on the DVD commentary that he felt bad for the actor who had to wear all the hot, heavy gluttony prosthetics, so to compensate, he made him well-endowed. 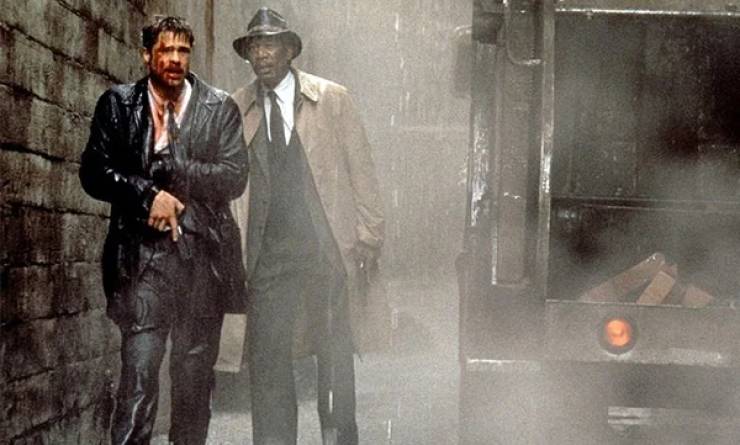 The filmmakers decided it should always be raining for two reasons: It added a sense of dread; and they never had to worry about bad weather. 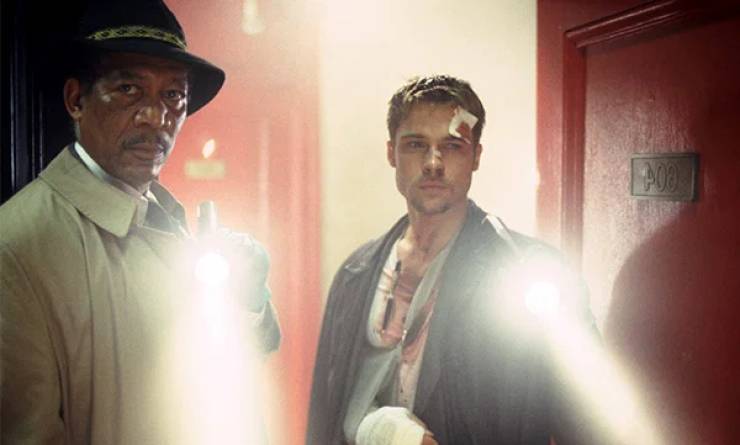 Brad Pitt fell while filming the scene in which Mills chases John Doe in the rain. Pitt’s arm went through a car windshield, requiring surgery. The accident was worked into the script. Coincidentally, the original script called for Detective Mills to be injured during the sequence. 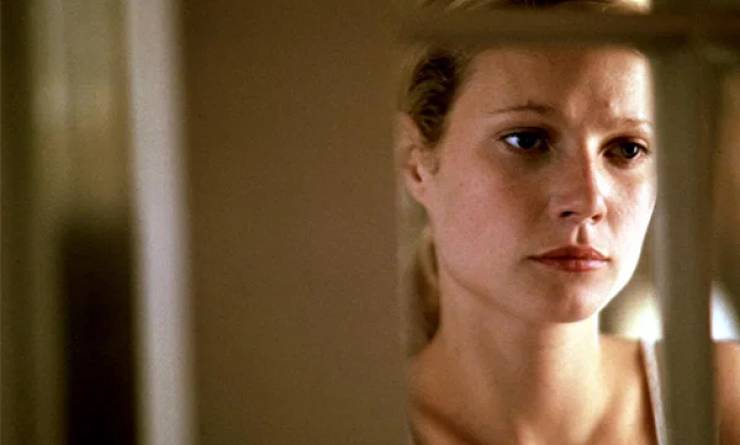 David Fincher was impressed with Gwyneth Paltrow’s work in Flesh and Bone (1993). She was his first choice for the role of Brad Pitt’s wife. Paltrow was initially not interested, so Fincher asked her then-boyfriend Brad Pitt to convince her to meet with him. 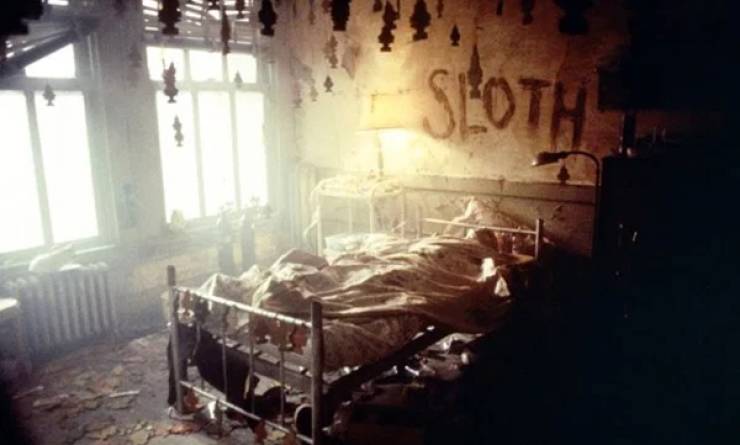 Andrew Kevin Walker had a very hard time getting a studio to buy the rights to his script because he was a complete unknown in Hollywood. Allegedly, he put together a list of agents that represented writers that work in the crime and thriller genres, and called each one until he got a positive response. 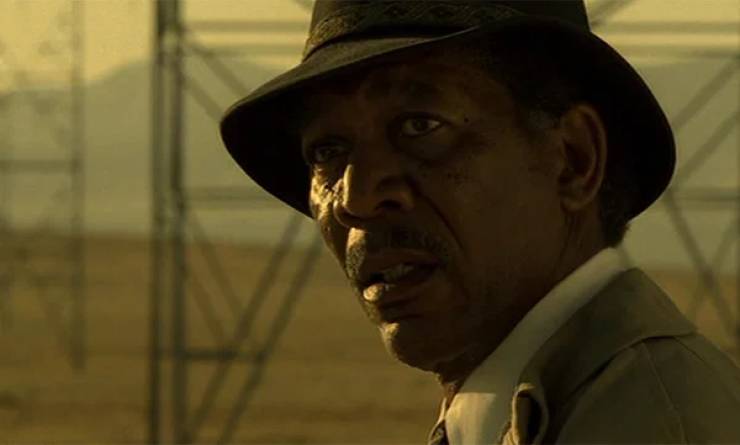 David Fincher thought that Morgan Freeman would turn down the role, thinking he’d feel the film was “too down market.” But he was the first one to eagerly join the cast. 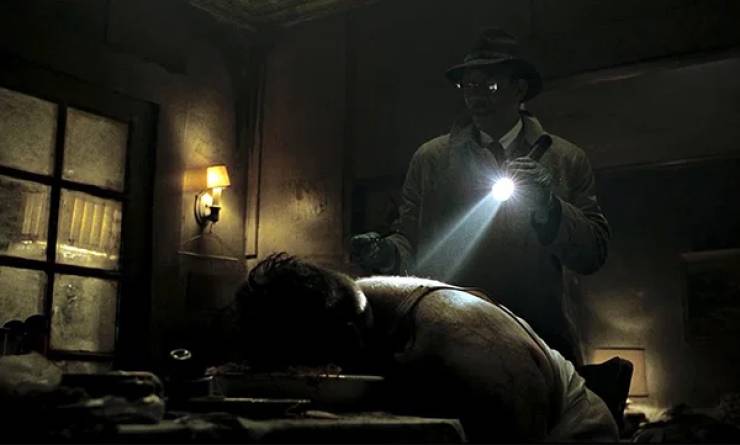 The film’s brooding, dark look was achieved through a chemical process called bleach bypass. The silver in the film stock was not removed, which deepened the dark, shadowy images in the film. 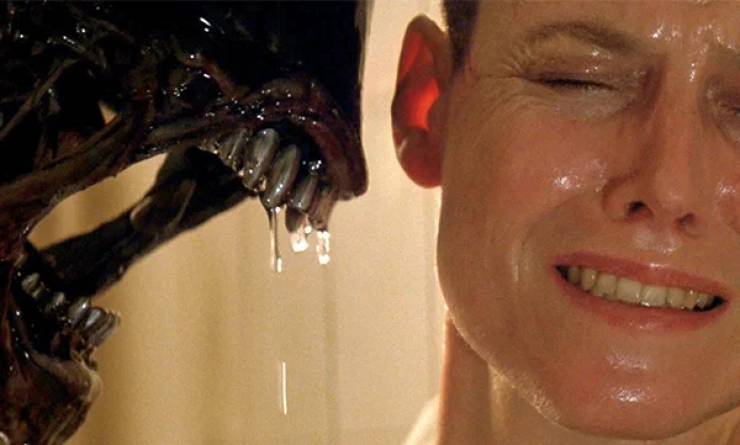 David Fincher was determined to make the film without compromising his vision. On his first film, Alien³ (1992), Fincher battled with the studio and was fired three times.

As preparation for his traumatic scene in the interrogation room, Leland Orser would breathe in and out rapidly, so that his body would be overly saturated with oxygen, giving him the ability to hyperventilate. He also did not sleep for a few days, in order to achieve his character’s disoriented look. 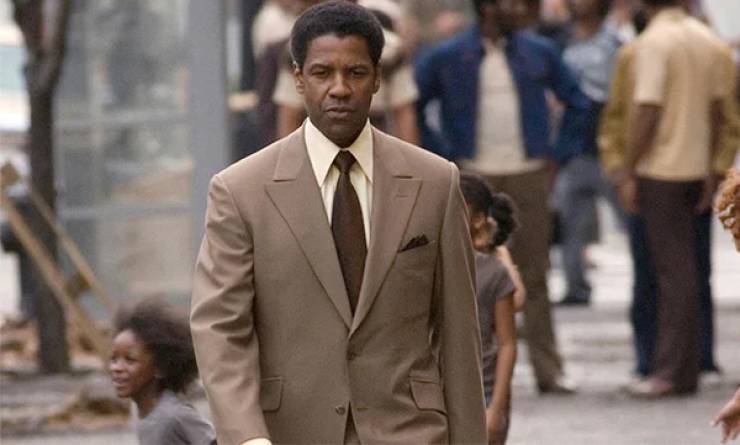 Denzel Washington turned down the part that went to Brad Pitt, telling Entertainment Weekly that the film was too “dark and evil.” Washington later regretted his decision upon seeing a screening. 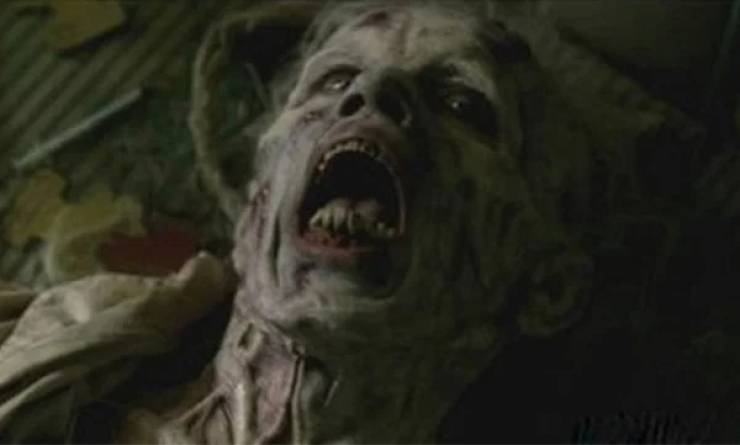 Make-up for the ‘sloth’ victim Victor took over fourteen hours.

The word “fuck” and its derivatives are said a discernible 74 times throughout the movie, mostly by Brad Pitt. 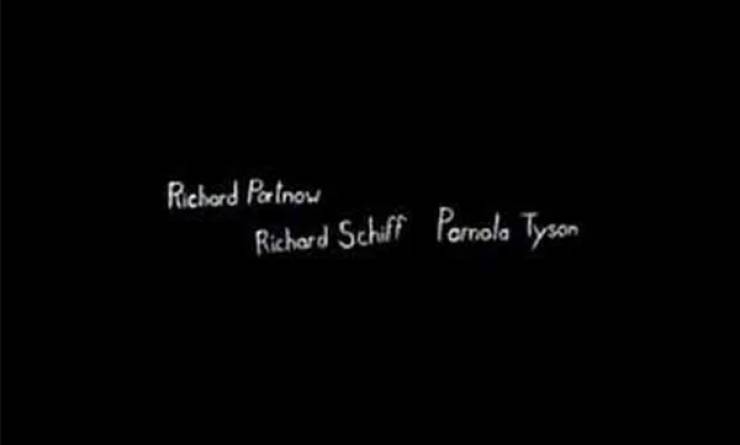 David Fincher wanted the credits to look like a killer had written them. 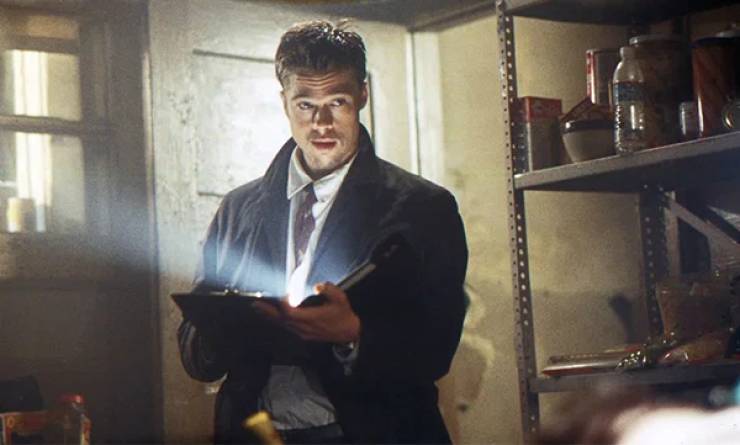 All of John Doe’s books were real books, written for the film. They took two months to complete, and cost $15,000. According to Morgan Freeman, two months is about the time it would take the police to read all the books. 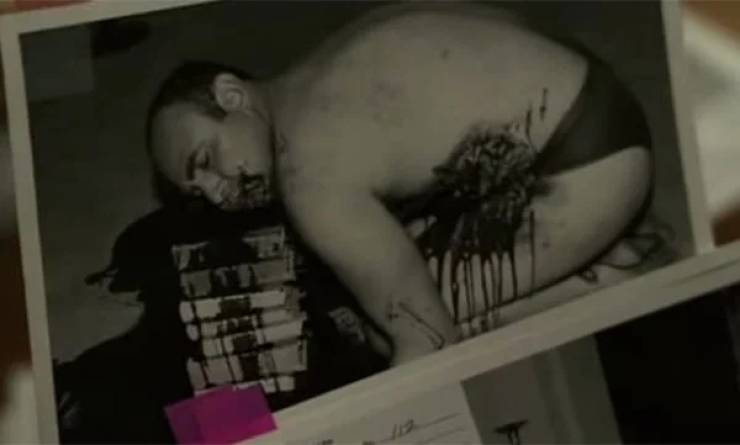 For the greed scene, Gene Borkan, who plays the victim, was hog-tied and only wearing his underwear for most of the shooting. He was covered in over two gallons of fake blood and the blood was so thick and sticky that his knees became stuck to the floor. 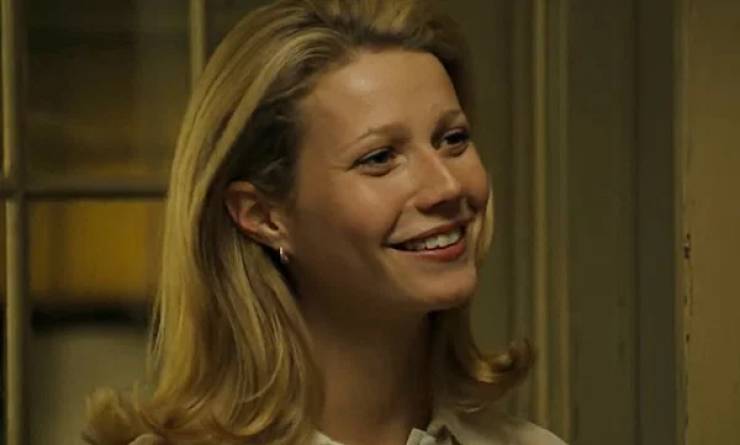 Brad Pitt said that Gwyneth Paltrow’s character is “the only sunshine we have in the film.” 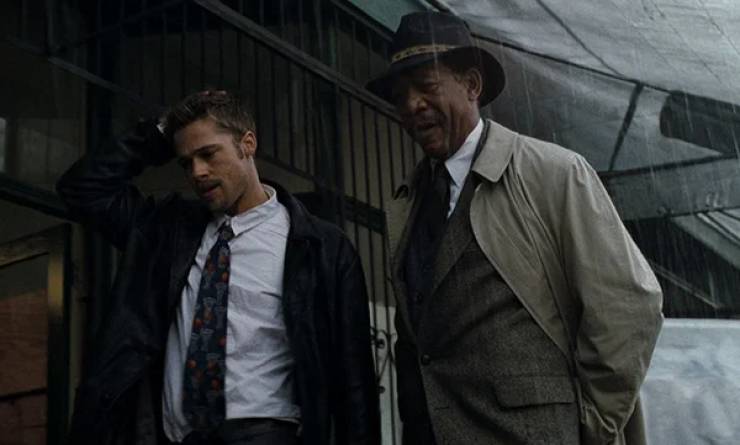 This was regarded as the first “A” production for New Line Cinema, proving that they could attract “A-list” directors and cast. 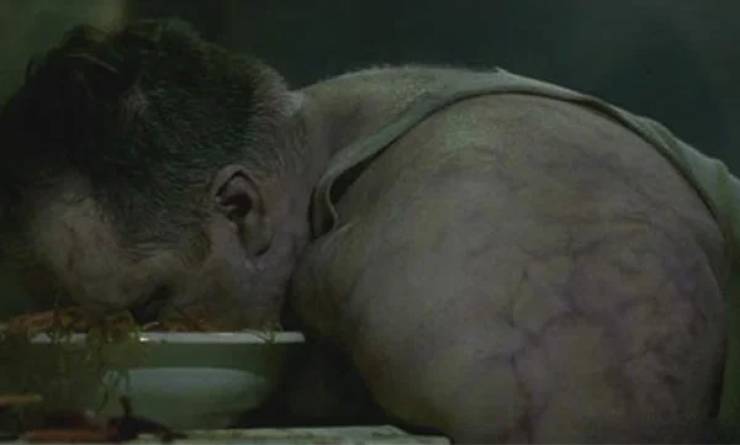 The ending in the movie is the ending in the original draft of the screenplay that the actors and director had signed on to. Producer Arnold Kopelson had it re-written, and the ending was changed to John Doe kidnapping Tracy, with Mills and Somerset racing to save her life. When David Fincher, Brad Pitt, and Morgan Freeman read the new ending, they all demanded that the original ending be put back in, or they wouldn’t do the movie.