“She was riding me on a pool chair in a closed cabana and I was moaning uncontrollably, so she leaned over, put a finger over my lips and shushed me. Apparently I was wayyyyy into that.”

“She kissed and lightly bit my neck. First time anyone had done that to me and it turned me on so much…”

“She said ‘You can do whatever you want to me'”

“A guy I liked unexpectedly pinned me against the wall and kissed me deeply, then we walked on into work like nothing happened. I was speechless.”

“A sex partner once told me we had to switch positions because my dick was too big. I’m pretty much on the average side, so ya, that made me feel kinda special.”

“When I’m on top and she wraps her legs around my waist and pulls me in closer.”

“My gf has very pale skin. We were having sex in the middle of the day with sunlight streaming in from the window on us and as she orgasms I see her change color. Without exaggeration. A flush blooms in the middle of her chest and I watch it spread over her body changing from porcelain white to an incredibly satisfying pink. It might have been the greatest gift I’ve ever received.”

“My first proper girlfriend introduced me to back massages. She rubbed me, she kissed me, she, er, grinded herself against me as I lay there groaning.

More than 20 years later I still find myself thinking about that.”

“After I threw up in my friend’s bathroom from having too much to drink, my then fiancée thought she’d make me feel better by blowing me. And then we had sex right there on the bathroom floor. That was several years ago, and it remains the hottest, most intense sex we’ve ever had.”

“My fuck buddy and I we laying in bed probably 15 mins after round 2. She starts sucking my dick again.

She responds, almost flippantly, “I don’t care I just like sucking your dick”

Turns out I did have another load in me…”

“We were at his place after dinner just cuddling on the couch and we start making out. All of the sudden, he pulls my hair back kind of aggressively and I was equal parts shocked and turned on.

He looks me in the eyes and goes “you’re bad, aren’t you?”

I just looked at him, nodded submissively, and nearly came right there.

We had the most passionate sex ever. Hair pulling, choking, and biting…the ‘baddest’ sex of my life…and it stands to be the hottest sex I’ve ever had.

Aaaaand then he ghosted me a few weeks later. Toxic piece of shit but damn…that sex lmao” 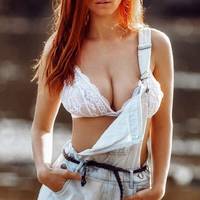 Kristine 2 year s ago
So much fake posts.
Reply
How to comment
NO FUCKING RULES!!!