Animals That Are Recently Extinct (17 pics)

You might be surprised to see the amount of animals that have become extinct in recent years and decades. 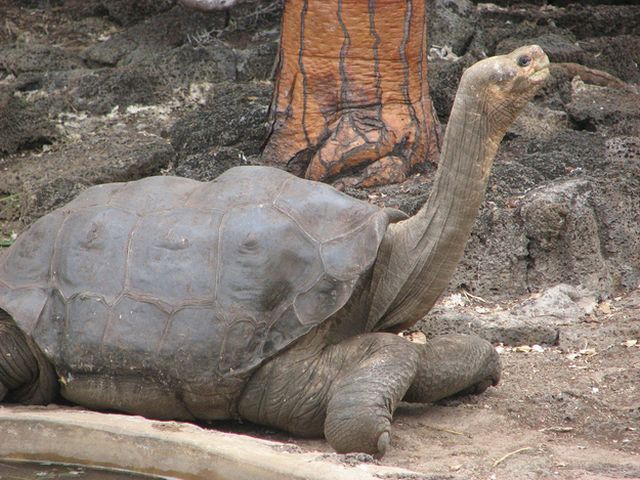 The last of his kind, Lonesome George died this weekend in his pen at a research facility. His exact age isn't known, but he was estimated to be over 100. 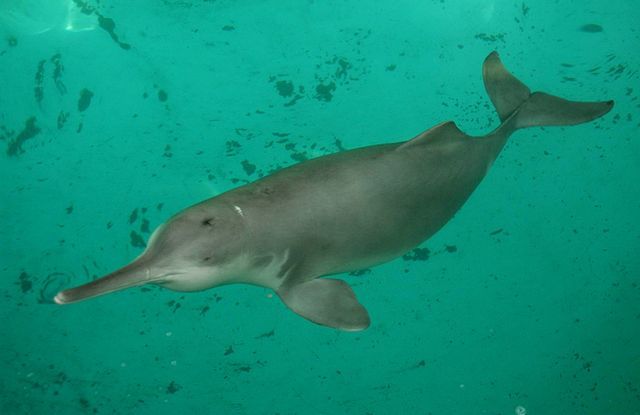 Declared extinct in 2006, a video of what appeared to be a baiji dolphin was taken in 2007. The species is still considered "functionally extinct", meaning that if there is only one of a few old creatures alive, no new ones will be born. 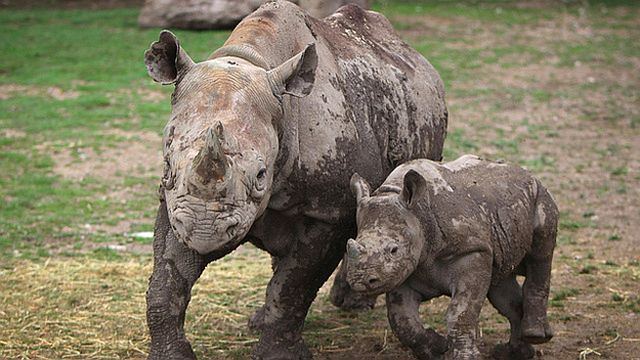 A subspecies of the black rhino that lived mainly in Cameroon, the western black rhino was a victim of rampant poaching, even after protections were issued in the 1930s. Scientists searched for any signs in 2006 and came up empty, and it was offically declared extinct in 2011. The other 3 remaining subspecies of black rhinos are also critically endangered. 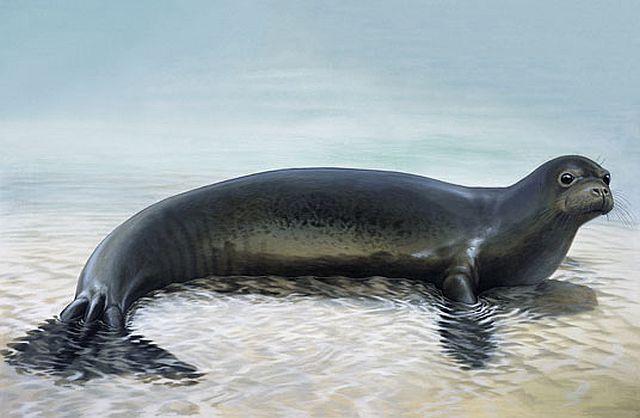 Although the last one seen alive was in 1952, it wasn't until 2008 that the caribbean monk seal was finally declared extinct. Christopher Columbus recorded killing a few of these seals when he arrived in the Caribbean, and they were hunted extensively during the in the 1700s and 1800s for their blubber, which was used as oil for lamps and machinery.

According to the notes from a zookeeper at the New York Aquarium, which had a few of these seals in the early 1900s, these cheeky seals had a habit of spraying water from their mouths at visitors who leaned in too close over the railing. 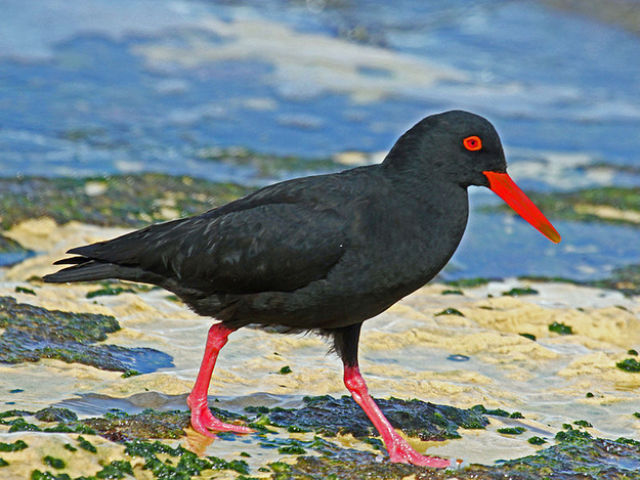 Photo of an African black oystercatcher, which is nearly visually identical.

These shorebirds lived on the Canary Islands off the coast of west Africa, and died out due to depletion of its shellfish food source due to commercial fishing. It's unclear exactly when the last birds died, local lighthouse keepers and fishermen said they hadn't seen it by 1940, but reports of sightings happened through the '80s. By 1994, it was officially declared extinct. Only 4 specimen of stuffed birds exist in museums today. 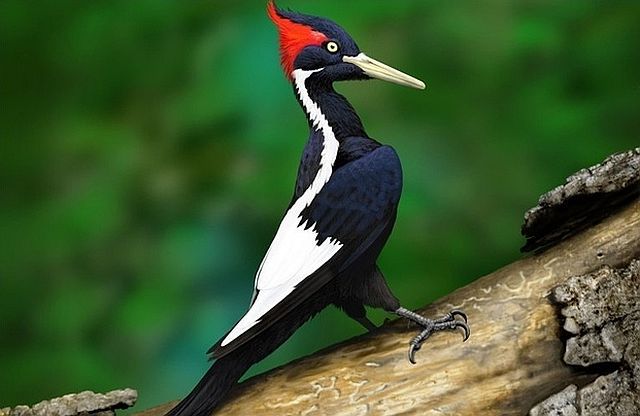 After habit loss of the swamps of the southern U.S., the last difinitive sighting was in the 1940s. Since then, there's been multiple reports of sightings, and a 2002 audio recording of the distinct sound it makes when pecking a tree sparked a flood of scientists and birders to come search for it. Despite some promising leads and tantalizing clues, the bird still remains officially extinct. 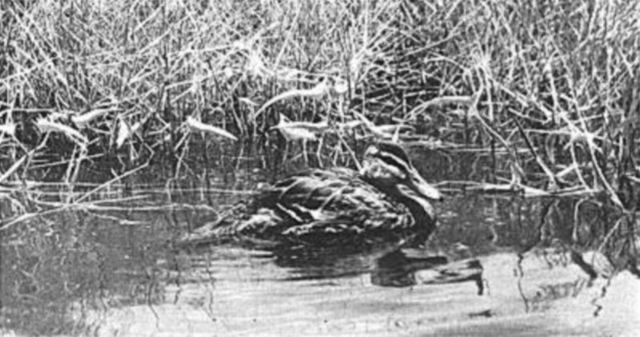 Living only on three small Pacific islands, including Guam, habitat loss from draining marshes for agriculture and damage to the islands during World War II was the main reason for this duck's extinction. The last pair of ducks were spotted in the wild in 1979, and the last known pair in captivity died at Sea World in San Diego in 1981. 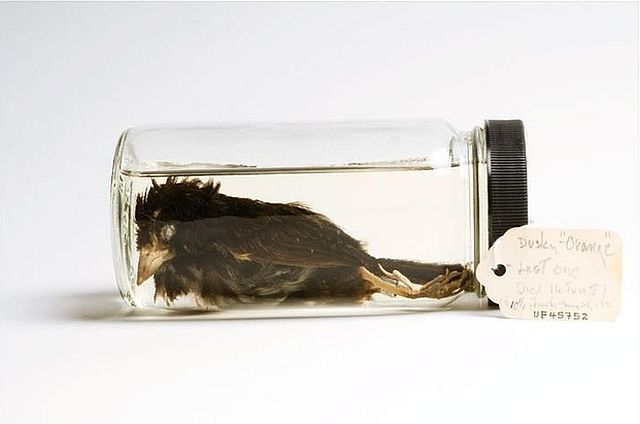 A native of the east coast of Florida, this species rapidly died out from DDT pesticide spaying and its habitat being taken over for use by NASA for the Kennedy Space Center. The last know bird died in 1987, and was officially declared extinct in 1990. 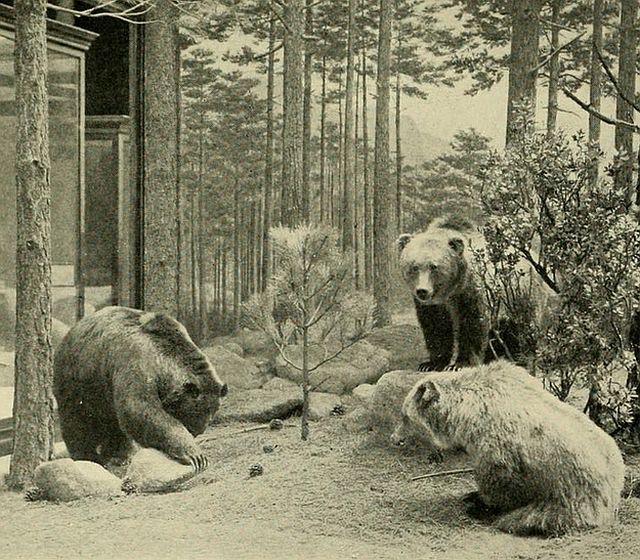 Think grizzlies only lived in cold places? The Mexican grizzly, like the grizzly that lives in the norther U.S. and Canada, are both subspecies of the brown bear. The Mexican subspecies was hunted to extinction by ranchers because the bears would kill their livestock. Only 30 were left by 1960, but by 1964 it was considered extinct. 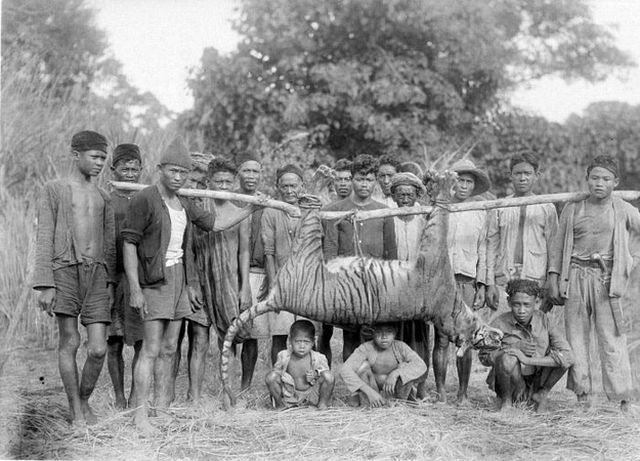 Loss of habitat due to farming was the main killer for this distinct subspecies of tiger that lived on the Indonesian island of Java. The last area where they lived was in the highest mountain of Java. A tiger was killed there in 1984, but by 1993 scientists couldn't find any evidence of tigers still living there. 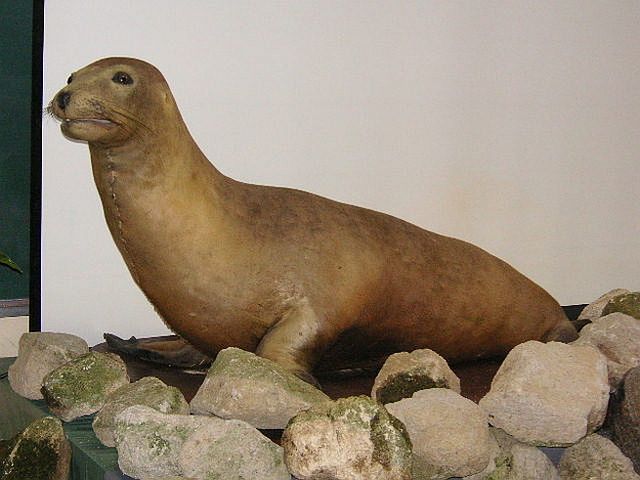 Commercial hunting for these along with habitat loss due to WWII did these seal lions in. There were a few sightings in the '60s, and a baby was caught in 1974. In 2007, the government of South Korea announced a plan to introduce the closely related California sea lions into areas the Japanese sea lion lived. 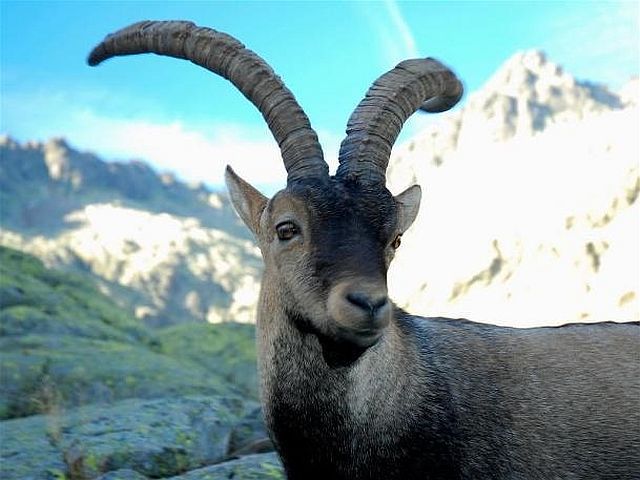 The last of this subspecies of Spanis ibex died in the wild in 2000 when a tree fell on her. Scientist had taken samples of the last ibex's DNA in 1999, and in 2009 scientist had mixed the DNA with domestic goat eggs to create a clone. However, the cloned baby ibex died shortly after birth due to lung defects. 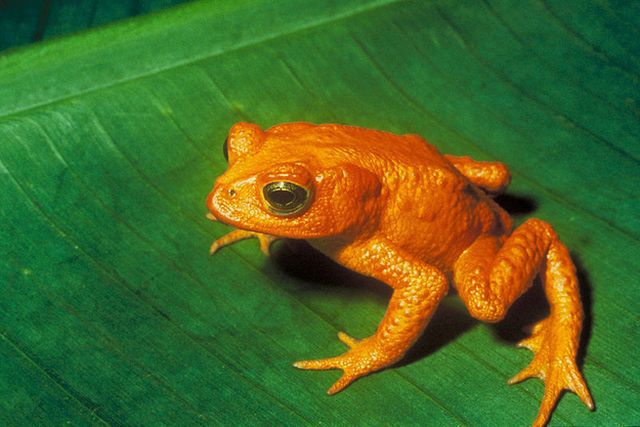 Scientists aren't totally sure what led to this Costa Rican toad's decline, but the best theory is that the El Nino weather pattern along with global warming and airborne pollution dried up pools and ponds the toad lived in. 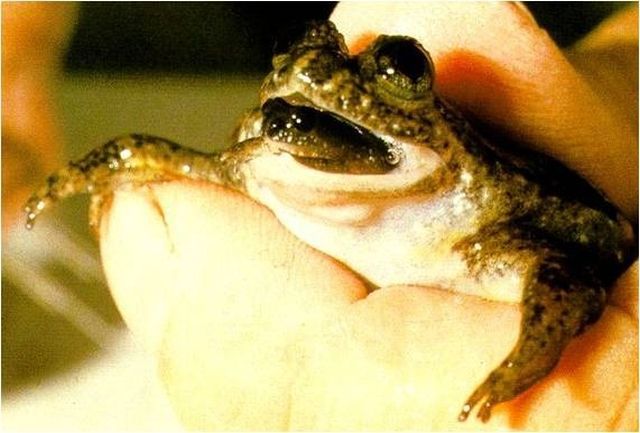 This Australian frog swallowed her eggs after they're fertilized, eventually "birthing" fully developed frogs out of her mouth. The last one its kind died in captivity in a laboratory in 1983. Since the mother is able to shut off her stomach acid while carrying her young in her stomach, scientists had hoped to learn something about how to cure human ulcers from the frogs. 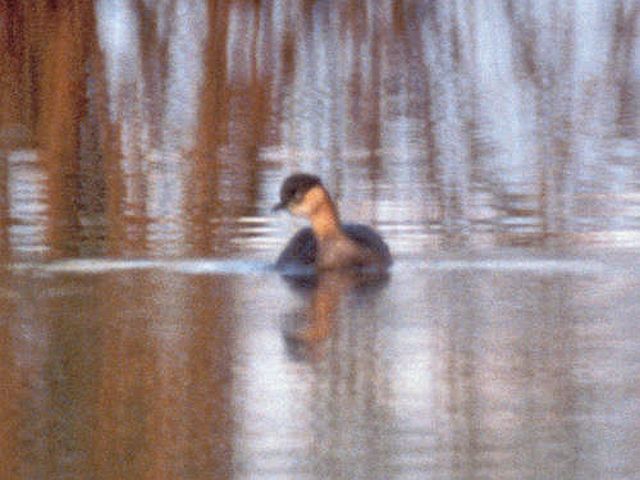 This small diving duck lived in primarily in one lake in Madagascar until habitat loss and predation by carnivorous non-native fish species killed it off. 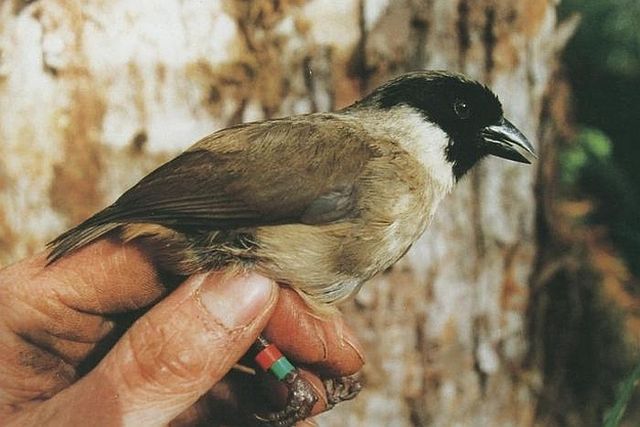 Non-native species, particularly pigs, cats, and rats, have wreaked havoc on Hawaii's ecosystem over the last few centuries, and most likely contributed to the decline of this unique bird. After an unsuccessful effort to get the last few remaining birds to breed, the last bird died in 2004. Technically, it's still listed as "critically endangered", but none birds have turned up in the wild after extensive searching for the last few years.

Although it hasn't officially been classified as extinct, this gross bug from the island of St. Helena in the south Atlantic hasn't been seen alive since 1967, and searches in '88, '93' and '03 turned up empty.

Sigh 10 year s ago
Yeah they keep finding animals they thought were extinct. Still, survival of the fittest, right?
Reply
0

Action 10 year s ago
#9 would be more believable if the allowed them to keep eating their burritos, wear their Sombreros and bullet belts across their chests, plus none of them are taking a siesta? WTF?
Reply
-1

Ridick 10 year s ago
@Sigh-No its not survival of the fittest. If it was up to that most of extent animals would still be alive. Most of the extint animal died because either people hunted and kill them until there were none left or related to something that human beings created, for example the NASA Space Center and all the chemical that pollute the air.

kool 10 year s ago
Human Specie 2050.
after years of contaminate their own environment left no food, no water, and die in pain.
Reply
2

EasyDay 10 year s ago
@Ridick- It actually is a great example of Survival of the Fittest; you are just too dumb to see it. We are the top of the food chain. "Hunting and killing" as you put it is us proving that. On the topic of all the pollutants... did you know that one volcanic eruption puts more crap in the atmosphere then humans have to date? Just sit in your corner and eat some granola and shut up while the adults talk.
Reply