Much of the US beef and milk cattle are fed synthetic hormones prior to their slaughter or milking in an attempt to get as much product out of the cow as possible. The National Cancer Association has since seen cases of hormonal cancer rise. 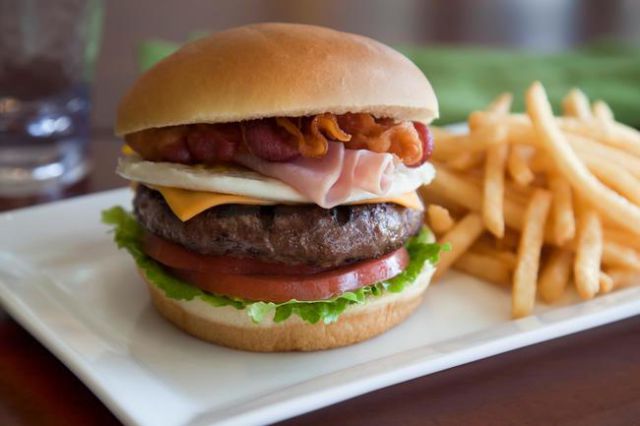 This stuff is (apparently) meat. More exactly, the clingy meat that’s pulled from the bone by a machine, including a little cartlidge. Pink slime is used as an additive to bulk up cheap meat.

Found in: Hot dogs, burgers. Health Hazards: This ‘meat’ is more likely to carry pathogens because it’s pulled from the bone. 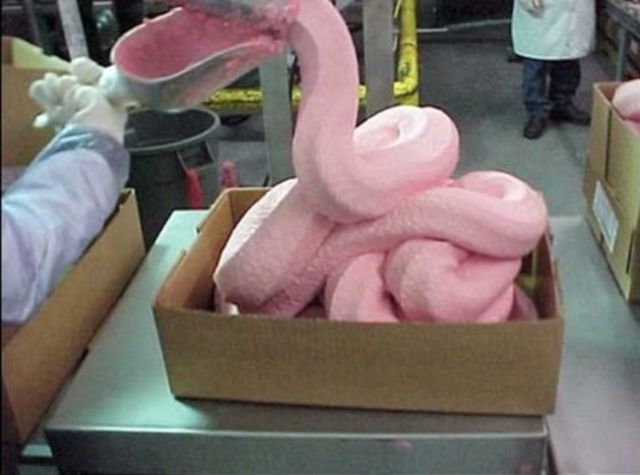 Many of the papayas that make their way to the US are genetically modified to be ringspot virus-resistant. While we don’t fully know the effect of genetically engineered foods on humans, many European countries are opposed to the idea because of the effect these crops have on animals.

Found in: Papayas, corn, and many other crops. Health Hazards: Animals fed GE foods have suffered intestinal and organ damage, tumors, birth defects, premature death and in some cases, sterility by the third generation. 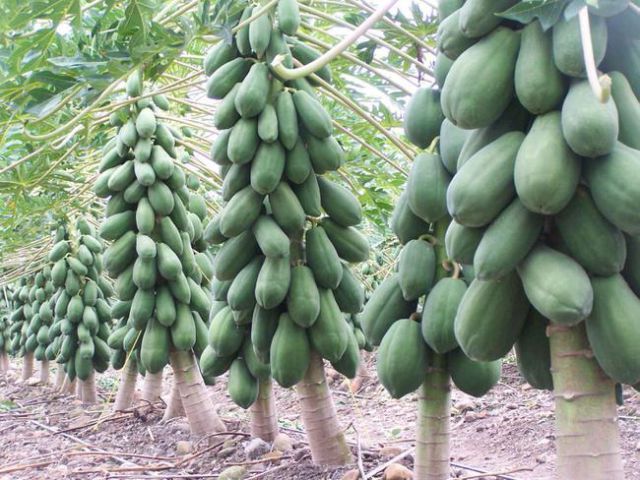 Carrageenan is used as an emulsifier and thickener in processed dairy goods, including baby formula. It has been found to cause gastrointestinal inflammation which can be especially dangerous to young children.

Banned in: Infant formulas in the European Union. 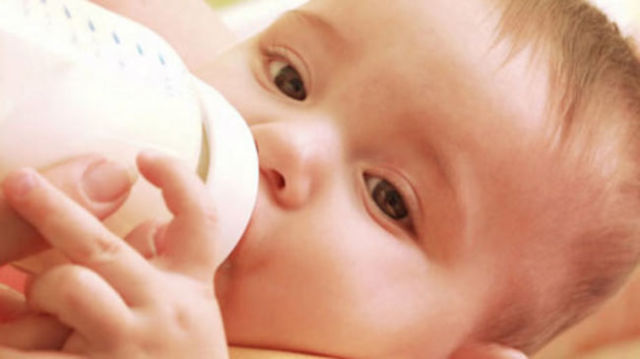 Atrazine is one of the most widely used herbicides in the US. This particular herbicide is notorious because it has been known to leak through the ground and contaminate drinking water. Like other herbicides, small doses also transfer into humans via the crops that we eat.

Found in: Drinking water, crops. Health Hazards: Has been linked to reproductive problems.

Ask someone to name a poison and arsenic will be one of the first things to come to mind. Oddly enough, it’s in the chicken that we eat because it makes their blood vessels appear pinker and, therefore, fresher. On top of this, arsenic-laced chicken manure is commonly used to feed cows, spreading the substance to their meat as well. 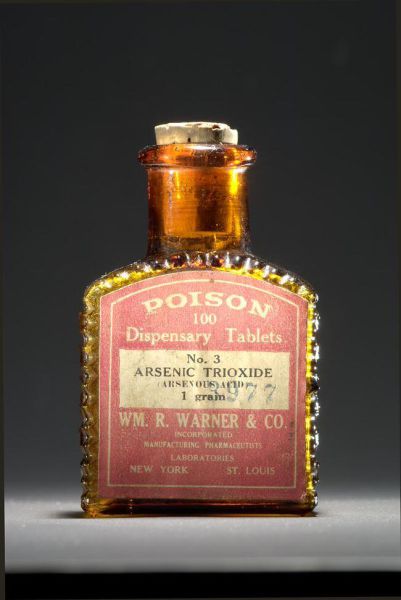 Ractopamine is a drug that makes its way into most pig and cattle feed. Similar stuff is commonly used in asthma medication and makes animals more muscular while reducing fat and increasing profit margins.

Banned in: Unsurprisingly, this additive has been banned in the European Union, Russia, and even China. 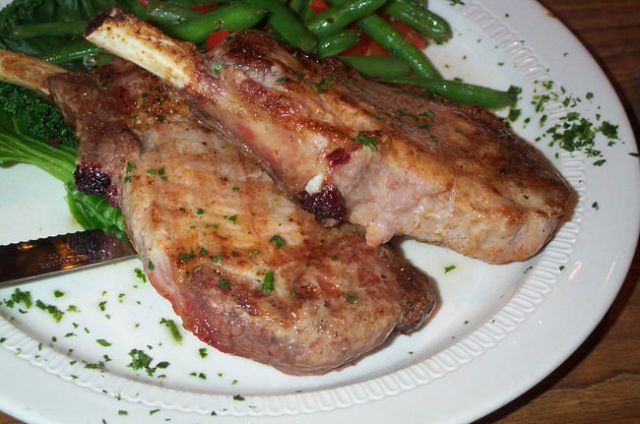 Brominated Vegetable Oil (BVO) is an emulsifier – it stops flavouring from separating and floating to the surface of sports drinks. The main ingredient, bromine, is a poisonous chemical used in flame retardant that is considered corrosive and toxic.

Banned in: Over 100 countries 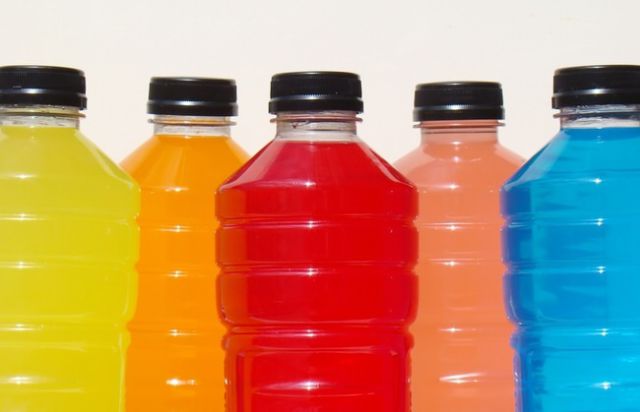 Color additives such as red 40 and yellow 5 are artificially created from coal tar and petroleum. Research has shown that bland coloured food is far less appealing to customers, so companies pump food full of this stuff.

Found in: Pretty much everything we eat, from candy to macaroni and cheese. Health Hazards: Brain cancer, nerve-cell deterioration, and hyperactivity in children.

Banned in: Much of the European Union 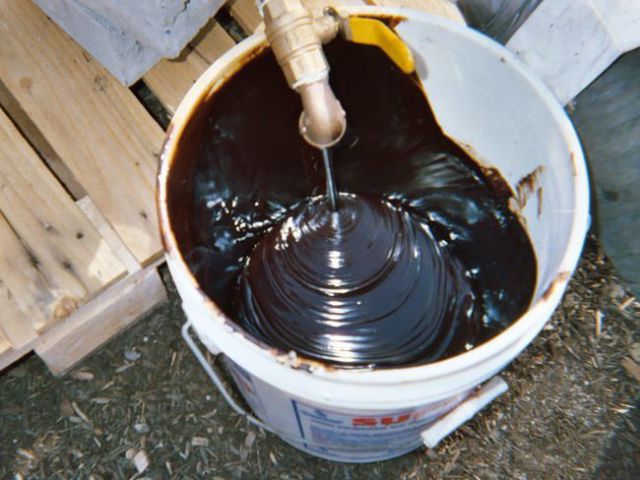 Thousands upon thousands of chickens are stuffed into small warehouses to produce cheap meat on a large scale. Needless to say, the chickens pick up a lot of harmful pathogens, so, their meat is washed with a chemical that has been weaponized to kill off any germs. 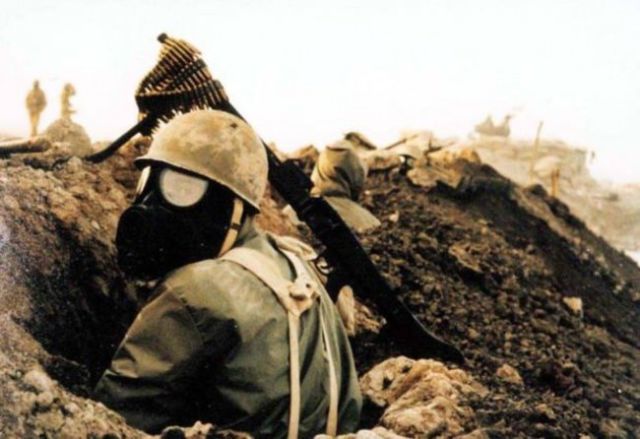 Banned in: UK and Canada, amongst many others. 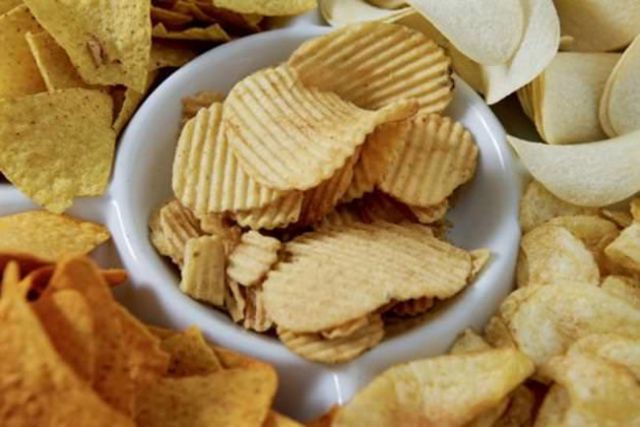 The US food industry seems to be obsessed with using toxic chemicals in its products. Bromine makes a return in the form of a flour-bulking agent which reduces the amount of time needed for baking. 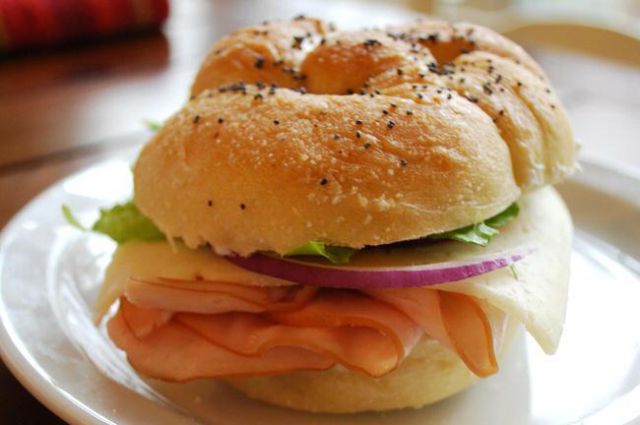 While most countries wait for flour to naturally whiten, US food companies add azodicarbonamide to bleach the flour as quickly as possible. This chemical is also found in sneaker soles.

Found in: Bread, boxed pasta and baked goods. Health Hazards: Has been linked to asthma

Banned in: In Singapore, you can face 15 years in jail for using the chemical in food 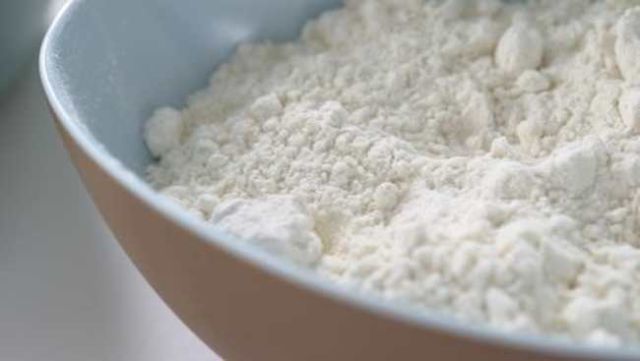 Found in: Cereal, gum, butter and meat Health Hazards: Has been linked to cancer

Banned in: UK and Japan 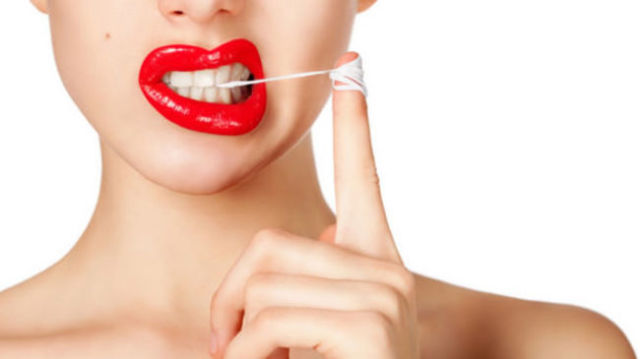 Antibiotics are commonly used on US farms to promote animal growth and combat the unnatural and squalid conditions of their pens. Around 80% of all antibiotic use in the US is in cows, salmon and other animals.

Found in: Meat Health Hazards: The overuse of antibiotics may be linked to an increase in drug-resistant bacteria that make people sick. 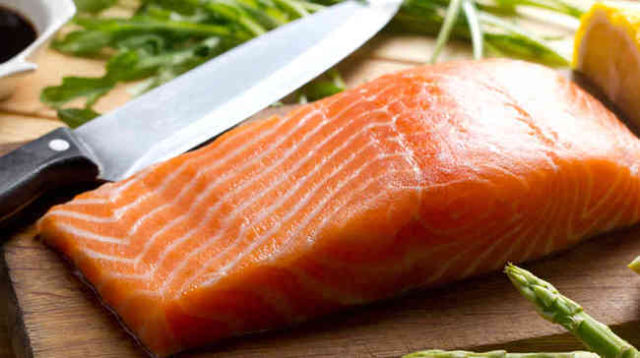 Food in the US is often exposed to low levels of radiation as a method of preservation and to stop food borne illness. The European Union only allows irradiation to take place in herbs and spices and argue that it is an unnecessary – and potentially dangerous – replacement for good hygiene in the food industry.

Found in: Meat as well as fresh fruit and vegetables. Health Hazards: Fear that irradiation could initiate dangerous chemical changes in food. 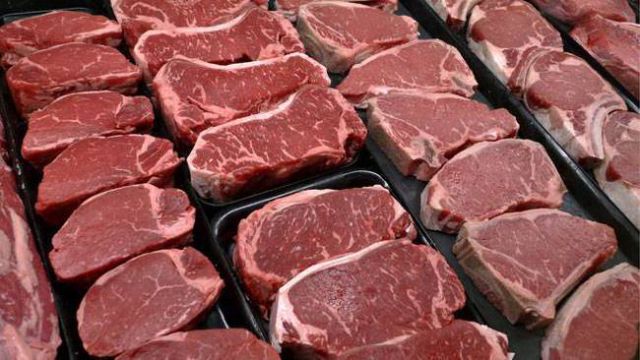 Phosphates are often added to meat to enhance moisture absorbance, color and flavor and to reduce shrinkage of poultry. 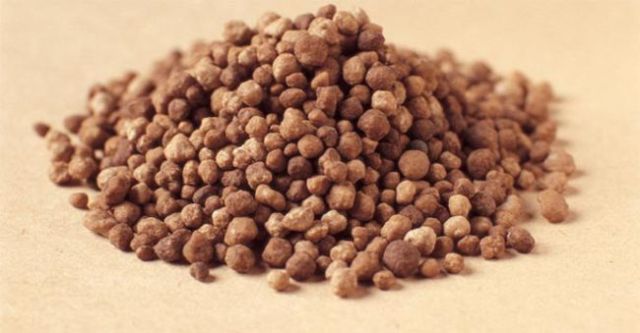 trollmaster9000 5 year s ago
Actually informative, I was just expecting some "foods people in USA eat that offends others" crap.
Reply
3

Fenrisulven 5 year s ago
#2 Not entirely true. This product made from cattle and sheep is banned because of fear of mad cow disease and scrapie. They still make it from chicken and turkey.
Never underestimate the power of large crowds, of stupid people.
Reply
0

ArxFerrum 5 year s ago
There is an agenda to wipe the meat industry off the map altogether. The new ideal foods for the masses would include meal-worm and sakajahouti.

A little common sense is enough not to poison one's self... though, that particular commodity is a little rare today as well.
Reply
-1

gigantes 5 year s ago
i have zero problem with that agenda. the american meat industry is actually the much bigger lobby and agenda, for one thing.

other than that, the meat industry tends to be incredibly cruel to animals, unhealthy as a staple food, a major pollutant, and incredibly unsustainable in terms of water-use. all things in moderation sure, but america does NOT eat meat in moderation.
Reply
2

ArxFerrum 5 year s ago
Meat has been a staple in the human diet since long before today. Human beings are omnivore by nature.

Judging people you don't know; complete strangers, by how and what they eat is... well... your choice.

gigantes 5 year s ago
appreciate the strawman rebuttal, but i'm not judging peoples... i'm commenting on the eating-habits of a nation. the comments i made are all based directly on research and fact.

meat being a staple has little or nothing to do with meat being an over-consumed, over-produced item in the region in question. just because our natural omnivorous diet included meat does not mean it was heavy on meat. 'nuf sed, yourself.
Reply
2

ArxFerrum 5 year s ago
The term 'nuff said' is to self, not you, or to whomever on the other side. It's the notion that this subject is not worth a festering bicker.

I won't say it again but I'll stick by the idea... iffens you don't mind, that is.

Addendum: rikki doxx is right... and I apologize if my words above were taken as being purposely offensive to anyone here. They really were not intended as such.

I just hold that we are all as uniquely individual as our fingerprints. Some people like meat and some do not.... just as some like one kind of music or clothing and others like other.

We should never seek to enforce our views upon others.

gigantes 5 year s ago
i appreciate your politeness and even-handedness... and do not mean to get in to a pointless internet slobberknocker... but again i would like to point out--

i am by no means commenting on the preferences of the individual. if you love meat then knock yourself out. all good. again... i am commenting on the diet and industry practices of a nation. they are causing great harm to the nation itself in the ways i mentioned, and i see that as a problem.

this is not about pushing a viewpoint. after all-- the heavy consumption of meat itself creates a strong viewpoint and agenda and impacts others whether that's realised or not.
peace.
Reply
3

speedswhitefurs 5 year s ago
Water is a chemical found in antifreeze, therefore it must be dangerous.
Reply
3

rikki_doxx 5 year s ago
A lot of BS statements there.
Reply
1