Old Rich Guys Get All the Hottest Young Girls (9 pics)

These older men have some really gorgeous eye candy on their arms and it might be because they are super wealthy. Just a thought.

Rupert Murdoch & Wendi Deng. Murdoch married Deng in a flutter of romance in 1999. Beyond those cute rimmed glasses and an Aussie accent that'll melt your heart, Deng (pronounced Daaannngg) likely gravitated toward his insatiable lust for global domination, proving once again that women love ambition. And $14.1 billion
1 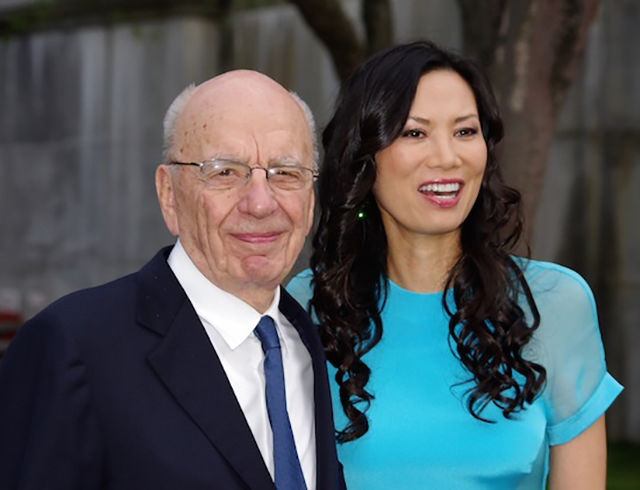 Hugh Hefner & Crystal Harris. Harris was born in 1986, when Hugh was 60. They married in 2012. She told Daily Mail that they've only "done it" once, and it lasted two seconds, which sounds bad until you learn it bought her a $5 million mansion.
2 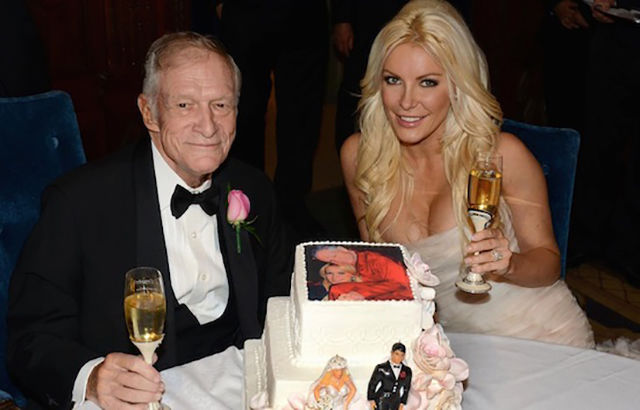 Donald Trump & Melania Trump. The real estate mogul and Slovenian model married in 2005. Melanie wore a $200,000 dress at the wedding, which begs the question why Donald won't spend that type of money to make his hairpiece look a little bit less like a dead ginger rabbit on his head.
3 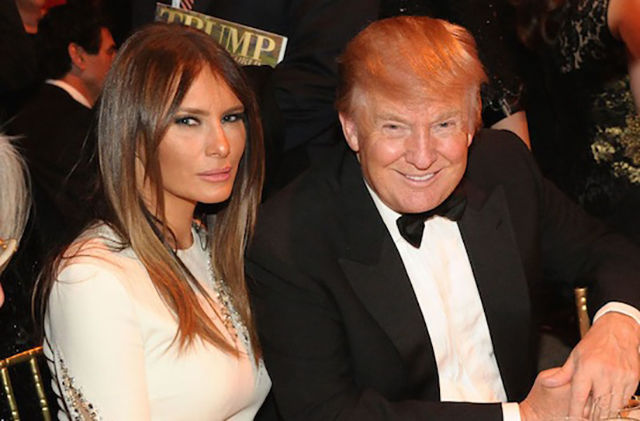 James Goldstein & Amalie Wichmann. In Game Two of the Western Conference Semifinals in the 2011 NBA Playoffs at Staples Center on May 4, 2011 in Los Angeles, California
4 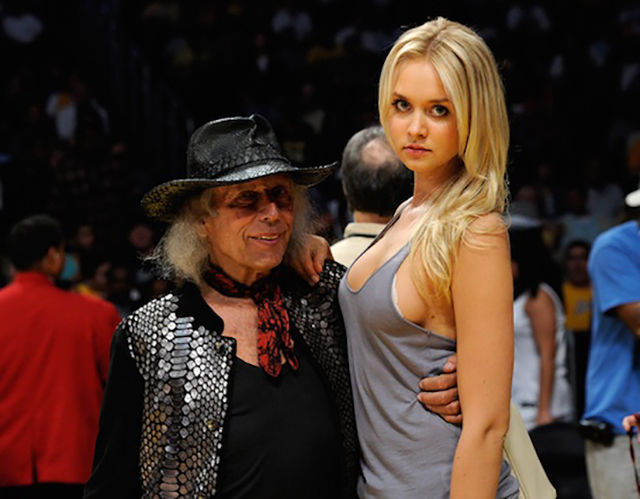 Richard Lugner & Cathy Schmitz. Australian billionaire and old sack of skin Richard Lugner married ex-Playboy model Cathy Schmitz in 2014. The 25-year-old said she married the 82-year-old for love, but admitted the relationship is "rocky." Whether that is due to her having sex with a walking corpse or him being unable to bring his walker to night clubs is up to speculation.
5 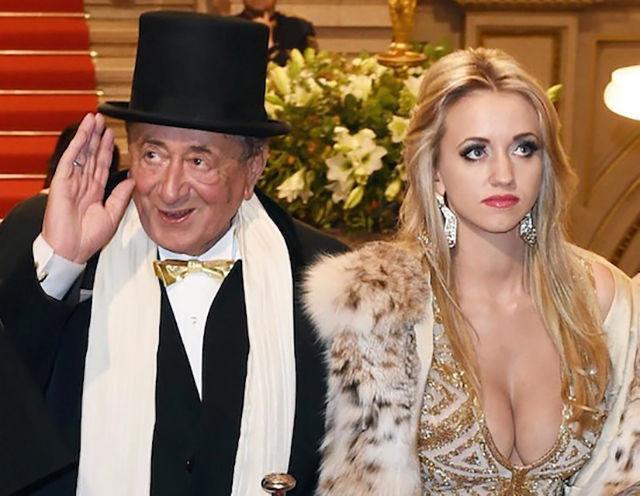 Bob Kraft & Ricki Noel Lander. In 2011, Patriot's owner Bob Kraft fell into a deep depression after his wife Myra passed. He claims Ricki saved him, which is all kinds of sweet. They spend their time watching football games, attending events, and making audition tapes for Ricki's budding acting career. Best of luck to the lovely couple.
6 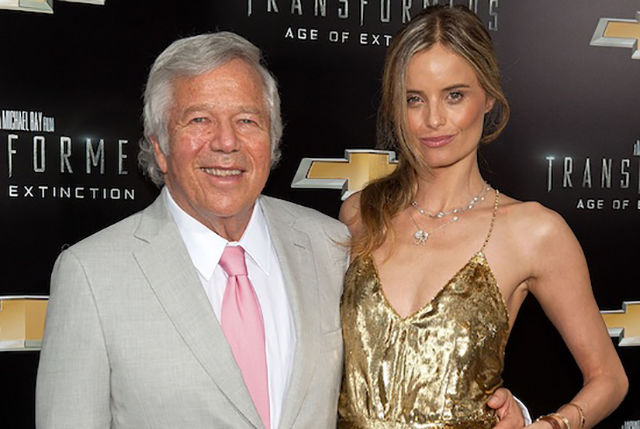 Sumner Redstone & Malia Andelin. Media magnate Sumner Redstone, looking as though he doesn't know what's happening to his wallet, is pictured with ex-stewardess and holy-shit hottie Malia Andelin. The NY Daily News reported they began seeing each other in 2009. Let's hope this flame doesn't die like Sumner did in 1990. (He's still walking around.)
7

Flavio Briatore & Elisabetta Gregoraci. Briatore an Italian businessman with a net worth of $150 million, which isn't the most impressive thing about him. He's married to Italian fashion model Elisabetta Gregoraci, and they have a son together. He's also the biological father of Heidi Klum's 10-year-old daughter, Leni. Apparent life philosophy? Cash checks and sleep with supermodels.
8 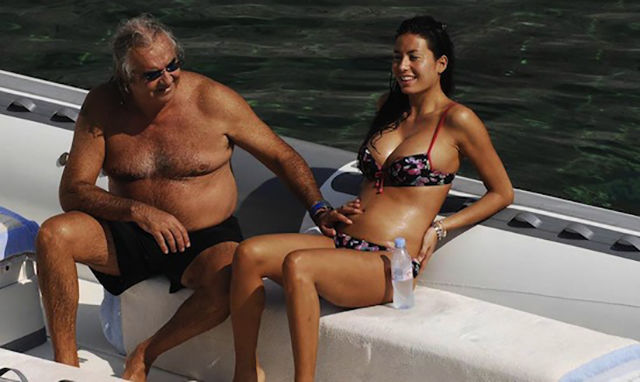 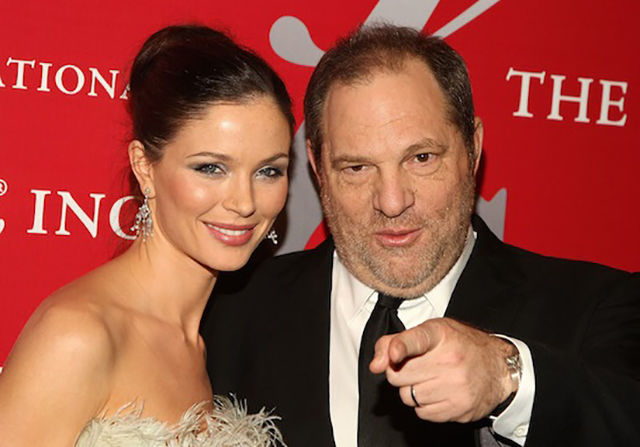 Bongfuhrer 5 year s ago
What will wimen not do for money..? I got more respect for prostitutes than these gold diggers..
Reply
0

meukr 5 year s ago
gold diggers have no self esteem..
Reply
0

Fenrisulven 5 year s ago
They are gold digging so hard they are almost triggering earthquakes.
Never underestimate the power of large crowds, of stupid people.
Reply
0