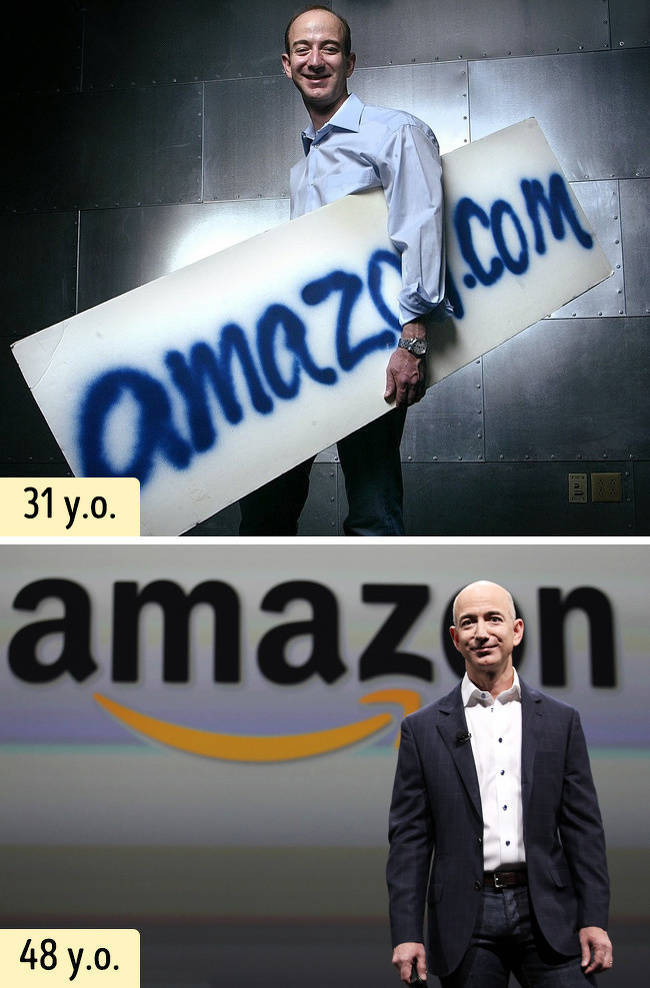 In 2017, Jeff Bezos, the owner and founder of the online store Amazon became the richest person in the world. The project was started in 1995 in a garage and just 4 years later, the value of the company was estimated at $6 billion. Aside from the online store, Bezos owns the huge publishing house, The Washington Post and is the founder of Blue Origin, an American, privately funded aerospace manufacturer.

Jeff Bezos had his first meetings with clients and partners in a book store next to the garage.

The laughter of the richest man in the world is just as famous as the man himself. The businessman laughs during negotiations and interviews, and you can even watch a compilation of him laughing on YouTube. Try not to smile while watching it. 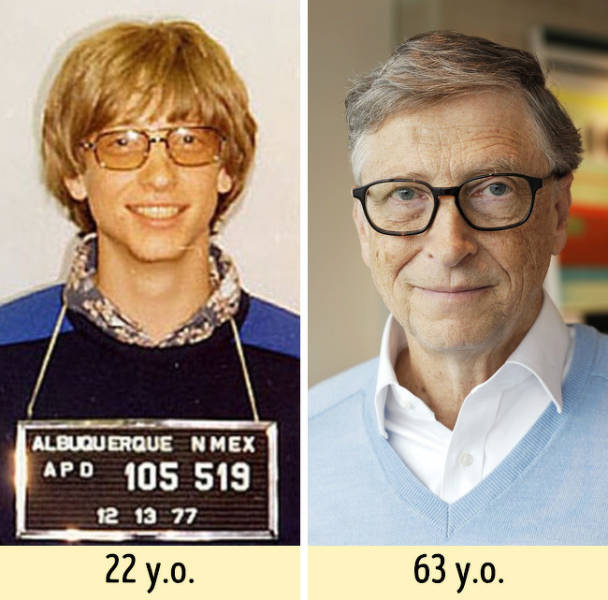 The Microsoft company was set up in 1976 and 10 years later, Bill Gates earned his first billion dollars. According to some sources, in 2006, his income was $6,659 per minute which is equal to $10 million a day.

Bill Gates has donated more money to charity than anyone else in human history: he gave $37 billion to charitable funds.

At the age of 13, he and his friends hacked a school computer and gained access to secret information. Instead of getting punished, the young hacker got a job offer from a computer center. 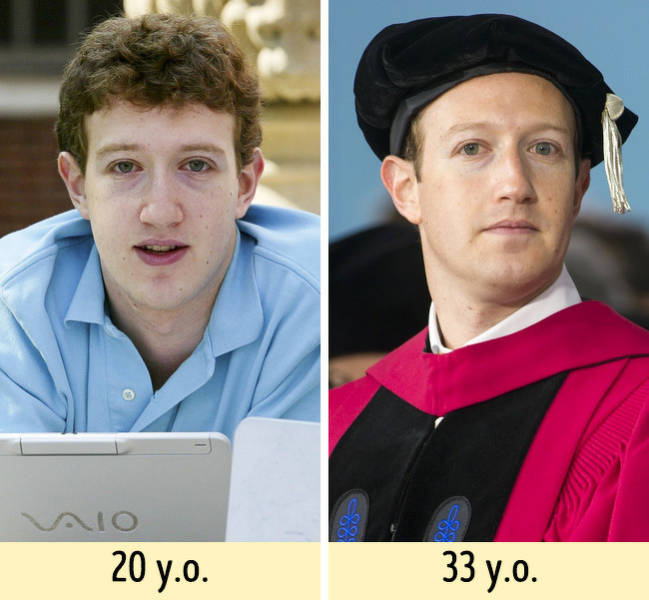 In 2004, at the age of 20, Mark Zuckerberg founded a website which later developed into the biggest social network in the world. By the way, he didn’t get his degree until 2017 because he dropped out from Harvard University to work.

Mark was 11 years old when he developed the first messenger.

The Zuckerberg family has a dog — a Hungarian sheepdog named Beast (and it’s gorgeous). Of course, Beast has his own Facebook page. 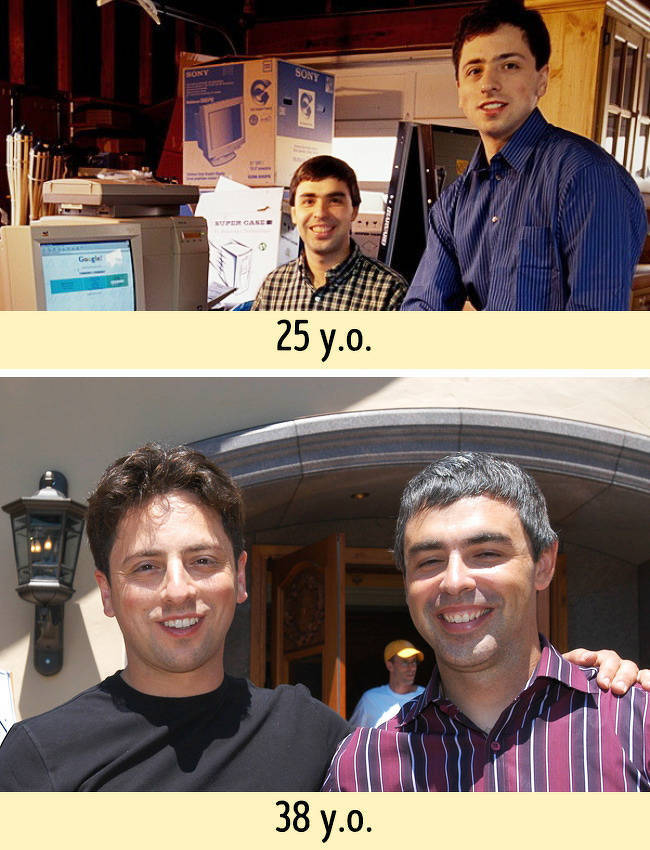 In 1998, Sergey Brin and his friend Larry Page founded a company called Google that allowed them to be on the list of Forbes just 6 years later. The first office of this gigantic company was located in a garage (see the photo) which belonged to a girl Sergey knew.

Sergey Brin and Larry Page are developing an anti-aging program.

There are goats hired by Google. They eat outside in front of the office and there is a shepherd looking after them. 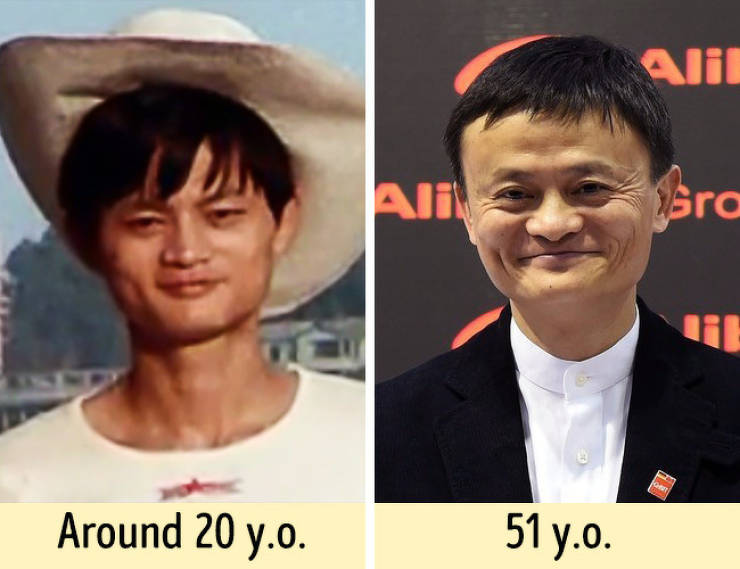 The founder of Alibaba Group, Jack Ma, couldn’t find a job after he finished his education and was rejected by 12 companies (even KFC). In 1995, he went to the US and returned home with an idea to set up an Internet company which he did 4 years later. In the beginning, the company wasn’t profitable but after the first dollar he earned in 2002, the business started booming, and in 2012 the profit of the company was at about $15 billion.

In order to study English, Jack Ma spent many years doing free tours around his hometown for tourists.

It was tourists who gave him the name Jack even though Ma Yun is the name of the richest man in China. 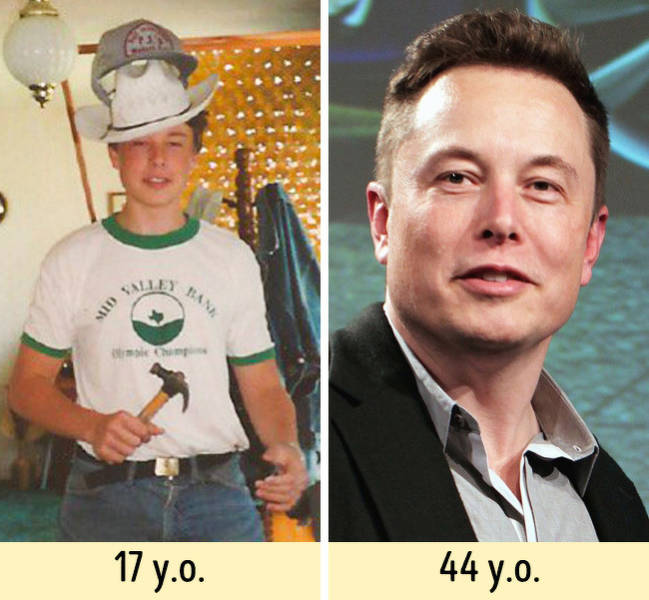 In 2003, Elon Musk set up a car company, Tesla Motors, that makes electric cars and 11 years later, he made a 76-hour-long drive that cost $0 (about the cost of the car’s fuel). This achievement is listed in the Guinness World Records.

The SpaceX company that works on spaceship launches was set up in 2002 and at the beginning of 2018, Elon Musk successfully launched Falcon Heavy to Mars. It was the first time in history that a rocket of such power was launched by a private company and not a government agency.

According to the director of Iron Man, Elon Musk was the prototype of Tony Stark who was portrayed by Robert John Downey Jr. 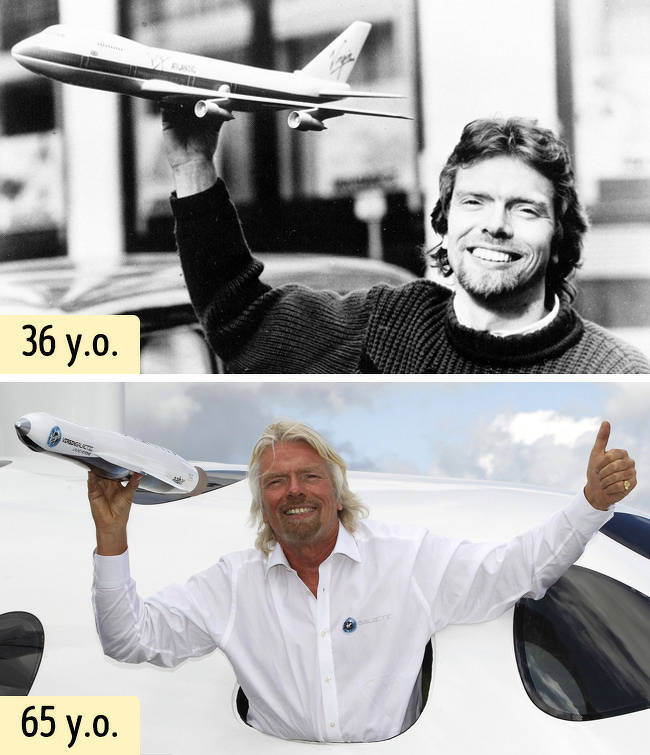 The brand Virgin that includes more than 400 companies today was created by the famous billionaire, Richard Branson, at the age of 20. At first, he opened a music store, then a series of insurance companies and movie industry organizations. In 1984, Branson set up Virgin Atlantic Airways, an air company, and 20 years later, he opened Virgin Galactic that allows you to go to space as a tourist.

Richard Branson has dozens of nicknames such as Hippie Billionaire, Nail in the Big Business Boot and others.

The future billionaire made his first business calls from a pay phone. But time was very limited, so Branson developed his own distinct manner of negotiating. 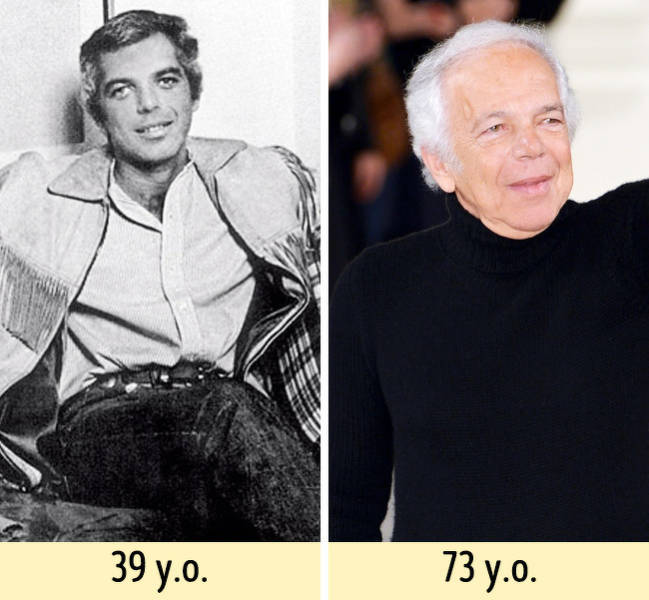 Ralph Lauren created his first clothing collection with a golf player as the logo at the age of 30. Today, the Polo Ralph Lauren Corporation makes perfume, furniture, textiles, dishes, wallpaper, sweets, and even things for pets. In 2007, Ralph Lauren was given the prestigious Fashion Legend Award.

The real name of the designer is Ralph Rueben Lifshitz. He was born in a family of poor Jewish immigrants from Belarus.

The first designer idea that Ralph had was when he read The Great Gatsby. But the company he worked for at the time rejected it. This was the moment he realized he had to do something on his own and 8 years later, he was working on the costumes for The Great Gatsby film by Paramount Pictures. 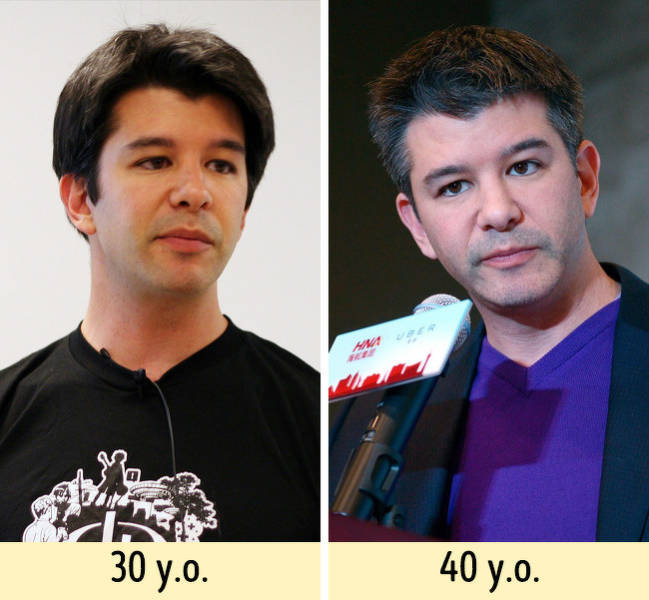 In 2009, Travis Kalanick along with Garrett Camp developed the application Uber that allowed taxi drivers to connect with passengers. Today, the company has offices in 58 countries and more than 300 cities across the entire world.

The people who know Travis Kalanick describe him as a very stubborn and persistent person. Once, he spent 9 hours in a Google office trying to convince an employee to work for his company. 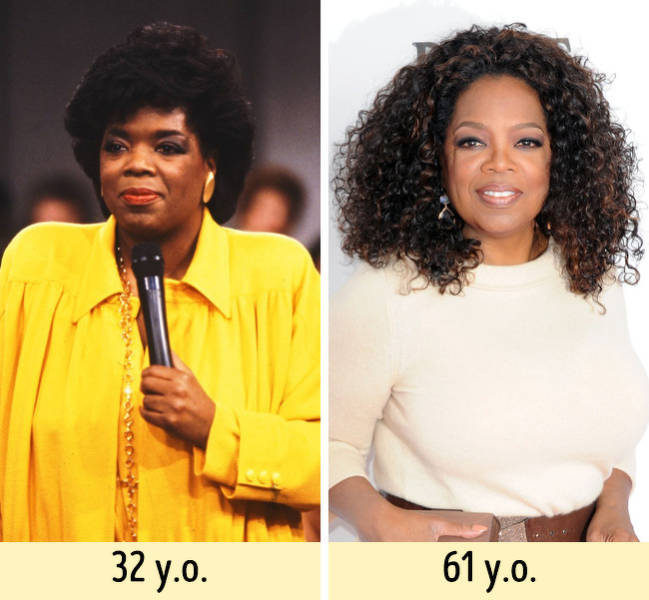 After 10 years of working for Baltimore’s WJZ-TV as an anchor of morning news, Oprah Winfrey created her own program in 1986. The Oprah Winfrey Show was on air for 25 years and was broadcast in 140 countries. After the show ended, Oprah Winfrey made her own channel, OWN.

At the beginning of her career, Oprah was a news anchor but was fired because she was too emotional. Once, she even cried in a live show.

In 1993, Oprah interviewed Michael Jackson. The show was watched by more than 90 million people which made it the most watched show in the history of American television. 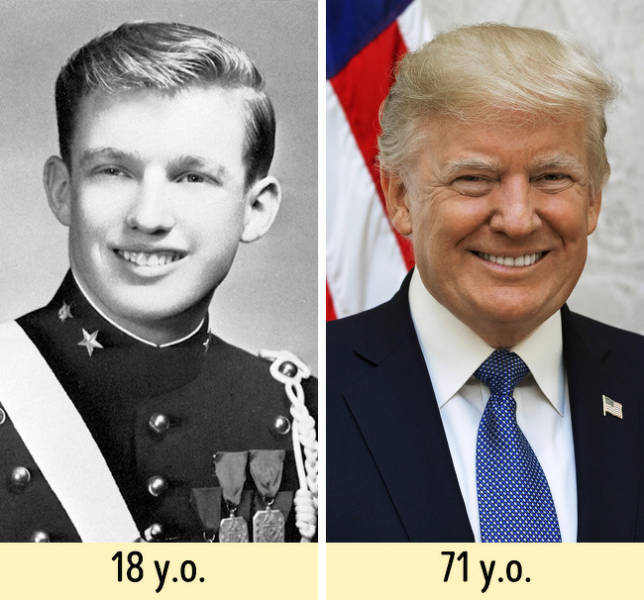 After studying, the young Donald Trump was serious about entering film school but in the end, he decided to work in real estate because he realized it was a more profitable business. His first project was a complex of 1,200 apartments that was built incredibly fast and sold at a great price.

10 years later, Donald Trump became a billionaire. In 2002, he started working on his childhood dream of working in the movie industry. He took part in several films and TV series and was the main character of The Apprentice.

From 1990 to 2015, Donald Trump wrote and published 17 books about self-development and success. Some of them were written in collaboration with other writers.

Wrong 11 month s ago
Most disliked: Zuckerberg hands down.
Reply
3

Undetectable 11 month s ago
The Trump entry is utter BS. He is a near utter failure and is only solvent due to being given money from his daddy and such.
Reply
0