"How do you spot a blind man in a nudist camp?

"Waterboarding in Guantanamo Bay sounds like a great time if you don’t know what either of those things are."

"What’s the difference between a dirty bus stop and a lobster with breast implants?

One is a crusty bus station and the other is a busty crustacean."

"What did Cinderella say when she got to the ball?

"Three men went to hell, and they stood before the Devil.

The Devil asked the first man, “WHAT DID YOU DO FOR A LIVING?”

The man answered, “I was a lumberjack.”

The Devil said “THEN WE WILL CHOP YOUR PENIS OFF.” He turned to the second man, asking the same question he asked the first.

“I was a fireman,” said the second man.

“THEN WE WILL BURN YOUR PENIS OFF,” said the Devil. He turned to the third man, asking the same question he asked the other two.

The third man thought about it, and finally answered the Devil:

“I was a lollipop salesman.”"

"As a Finn I have a special fondness for Russian/Soviet political jokes.

-A judge walks out of his chambers laughing his head off. A colleague approaches him and asks why he is laughing. “I just heard the funniest joke in the world!” “Well, go ahead, tell me!” says the other judge. “I can’t – I just gave someone ten years for it!”"

"A boss had 2 employees. Alice and Jack. he only needed one. but they were hired at the same time and were both equally good at their job.

he couldn’t decide which to get rid of. he was sitting at a bar thinking about the situation.

Alice walks in and sits beside him and asks “you seem down, what’s wrong?”

the boss said “I need to either lay you or jack off.”

"How many potatoes does it take to kill an Irishman?

Guy pulls out a 10″ pianist from his pocket and sets him on the bar. He starts playing beautifully.

The bartender, wowed, demands “Where the hell’d you find that little man?!”

Guy says “I’ve got a tiny wizard in my other pocket. For another beer, you can make a wish”

"Did you hear about the man with 5 penises? His pants fit like a glove."

"Doctor, Doctor, I swallowed a pen

Well, sit down and write your name"

"People are shocked when they find out what a terrible electrician I am."

"An Englishman, a Frenchman, a Spaniard and a German are all standing watching an American street performer do some juggling. The juggler notices the four gentleman have a very poor view, so he stands up on a wooden crate and calls out, “Can y’all see me now?”

"My grandfather has a heart of lion …. He’s now banned from the zoo"

"What’s the difference between a stripper and a waitress at a strip club?

"What’s red and bad for your teeth?

"What’s the difference between a lentil and chickpea? 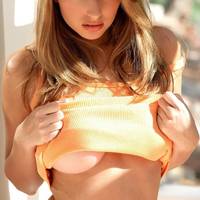 Rafa 1 year ago
What is yellow and cant swim?